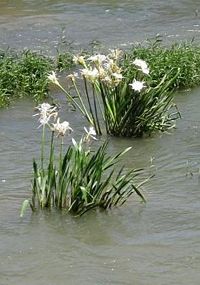 Cahaba lilies on the Cahaba River, May 2009

The Cahaba lily (Hymenocallis coronaria) is a type of spider lily native to sunny, fast-flowing shoals in the Cahaba, Black Warrior, Coosa, Tallapoosa and Chattahoochie River systems in Alabama and to a few rivers in Georgia and South Carolina. There are currently 70 documented populations of the plant, of which 46 are in Alabama.

The aromatic flower, which appears from mid-May to mid-June, is white, crown-shaped and approximately 3 inches in diameter. New blooms appear daily and are pollinated by Plebeian sphinx moths and Pipevine swallowtails. Once germinated, new seeds drop into the water where they form bulbs and lodge between rocks, ready to send up leaves and flowering shoots the next April.

Because the Cahaba lily's habitat is restricted to shallow, free-flowing shoals it has been threatened by the damming of large rivers for hydroelectric power as well as by silt and deposits from mining, industry and construction.