This article is about the university president. For the Barons outfielder, see Carlos Smith (outfielder). 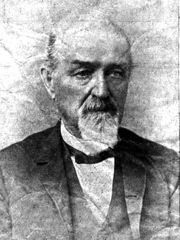 Carlos Green Smith (born October 18, 1812 in Oglethorpe, Georgia; died October 14, 1892 in Palatka, Florida) was an educator, physician and the sixth president of the University of Alabama.

Smith was the son of Reverend James Smith and Julia Green Smith of Virginia. He was raised in Virginia and western Tennessee and studied at the school of John B. Clausell. He enrolled at the University of Nashville and 1837 and graduated the following year with an LL.D. For two years he tutored students at the University until he was extended an offer to join the faculty of the Hume Academy in Hansville, Tennessee as a professor of mathematics.

Smith's health forced him to resign that position. When he recovered he enrolled at the Medical College of Louisville, Kentucky. He interrupted those studies to become chair of ancient languages at the LaGrange College in North Alabama in 1843, but resumed his medical studies at the University of Pennsylvania, and was awarded a doctorate in medicine in 1847.

Smith married the former Martha Ashe and had nine children between 1852 and 1866. He returned to Alabama to accept an invitation from his brother-in-law, Henry Tutwiler, to teach at the Green Springs school. From there he was made principal of the Green Academy at Huntsville in 1853, and then founded his own school, the Mountain Home Academy, in Lawrence County.

Mountain Home Academy was destroyed during the Civil War and Smith moved back to Huntsville to teach. In 1874 he accepted an offer to succeed Nathaniel Upton as president of the University of Alabama, still struggling after the War, with a student body of about 52 boys.

Smith traveled around the state to recruit students and was successful in increasing enrollment. In 1878 the Alabama State Legislature replaced the University's Board of Regents with a Board of Trustees, which assumed more control over spending. In one instance, Smith redirected money earmarked for repairs to the president's mansion to pay for other priorities. That minor insubordination led the Board to seek Smith's resignation.

In 1878 Smith left to take the reigns at the Livingston Female Academy, which changed its name to the Livingston Normal College. He served alongside his niece, Julia Tutwiler, as co-principal. He retired in 1886 and moved to Palatka, Florida, and died there six years later.