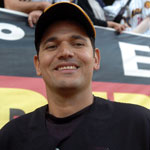 Carlos Subero (born June 15, 1972 in Caracas, Venezuela) was the manager for the 2008 Birmingham Barons.

Subero was a professional baseball infielder from 1991 to 1995, playing for the MLB's Kansas City Royals, Pittsburgh Pirates, and Texas Rangers. In 1999 he became a coach, and began his managerial career in 2001 for the Rookie League GCL Rangers. He managed several different minor league teams for the Rangers organization until 2007.

On January 18, 2008, Subero was announced as the manager for the 2008 Birmingham Barons. During his one season at Regions Park, Subero's Barons pitchers led the league in earned run average and reached the Southern League playoffs.

In 2009 Subero was hired to manage in the Los Angeles Dodgers organization, helming the Inland Empire 66ers for a season before returning to the Southern League as manager of the Chattanooga Lookouts in 2010 and 2011. Most years Subero also manages a team in the Venezualan Winter League.