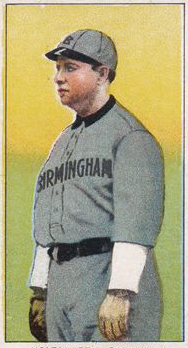 Molesworth was the younger of two boys born to farmer Thomas Molesworth and his wife, the former Sarah Druscilla Browning. He attended local schools and married Mollie Bruchey in 1894. The couple had two daughters in the next few years, who were often left with his older brother, Vernon, while he was traveling. Mollie Molesworth died in 1900. He married Ethel Irene Harris of Baltimore, Maryland in 1903 and had a third daughter with her. They divorced before 1910. His third wife, Sarah Phleeger, bore him two sons.

Molesworth began his playing career with local amateur teams until signing with an independent team from Winston, North Carolina on August 8, 1895. The young phenom rapidly caught the eye of Washington Nationals manager Gus Schmelz, who signed him and put him on the mound against the Philadelphia Phillies on September 14 of that year.

The rookie pitcher got through a scoreless first before allowing 13 runs in the next five innings. He got one more start and a relief appearance with no decision before starting the second game of a September 30 double header against Detroit. Molesworth pitched into the eighth inning for a complete game, but the Nationals lost 10-8. He ended his Major League career with an 0-2 record and a 14.23 earned run average. He allowed 33 hits and 15 walks, hit 4 batters, and struck out 7.

Though scheduled to start the 1896 campaign in the Nationals outfield, Molesworth actually began the season with Rockford Forest City of the Western Association. The club folded on July 25 and Molesworth made a circuit of smaller outfits in Shamokin, Palmyra and Johnstown, Pennsylvania and Cortland and Binghamton, New York. In 1899 he was moved to the outfield again and batted .337 with 108 runs in 110 games. After stops in Elmira and Schenectady he found his way south to the Chattanooga Lookouts mid-way through the 1901 season. He remained with the Lookouts in 1902 and then signed with the newly-created Montgomery Black Sox, where he established himself as a hitter, winning the 1905 Southern Association batting title with a .313 average.

Molesworth joined the Birmingham Barons as a player in 1906 and started at center field. In August 1908 he took over as the club's manager. With the sometimes-grudging support of new team owner Rick Woodward, he slowly transformed the last-place team into a contender. Woodward kept him on as manager after Miller Huggins turned down the job before the 1910 season. Molesworth himself made the first Barons hit at the newly-opened Rickwood Field on August 18. He ordered four consecutive bunts in the 9th inning to rally the home team to an opening day win over the Montgomery Climbers.

Despite his popularity as a player and his solid numbers for an outfielder, Molesworth removed himself from the starting lineup during the 1911 campaign. His 1912 Birmingham Barons won the Southern Association pennant with a 85-51 record. The team finished 3rd in 1913, but regained the pennant in 1914 and fell 4-2 to the Milwaukee Brewers in the Minor Leagues Championship series.

During World War I, Molesworth drilled soldiers in physical education at Camp Sevier in Greenville, South Carolina. He returned to the Barons and remained popular and effective as a coach and mentor, though he won no more championships. He helped develop a number of Major League prospects such as Burleigh Grimes and Pie Traynor, both of whom went on to the Pittsburgh Pirates on the way to the Hall of Fame. In July 1922, with the team already out of the race at 40-44, Molesworth tendered his resignation "in the best interest of baseball in Birmingham". He ended his Barons career with a 1,098-977 record (.529) and two pennants. He began scouting for the Pirates and soon accepted a job managing the Columbus Senators of the American Association. His three years there were unimpressive and, after 1925 he returned to scouting, in the Pirates' employ for another two decades. World War II made baseball scouting impossible and, discouraged, he retired from the game in 1947.

In retirement, Molesworth returned home to Maryland and occupied himself by hunting and fishing. He moved into a nursing home in 1956 and died there five years later. He is buried at Mount Olivet Cemetery in Frederick, Maryland. He was survived by three daughters, two sons, eight grandchildren and ten great-grandchildren.

Molesworth was named to the inaugural class of the Birmingham Barons Hall of Fame in 2005.