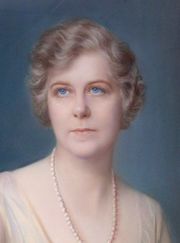 Caroline Acree and Johnson married on November 2, 1897 at St Paul's Episcopal Church in Chattanooga and moved to Birmingham in 1902. The couple were active members of the Cathedral Church of the Advent and participated in the city's civic life, especially with the early growth of Holy Innocents Hospital (now Children's Hospital), which she served as President. She also served as president of the Alabama Chapter of the Colonial Dames of America and was an active supported of the YWCA. A residence hall at the University of the South in Sewanee, Tennessee is named after her.

Among their children were Alice (born 1904), Jessie (born 1913), Crawford Jr and Allen. After her husband's death in December 1942 Caroline Johnson assumed day-to-day management of the bottling company until the end of World War II when her sons rejoined the business.

Her two sons, along with four grandchildren and six great-grandchildren survived her when she died after a long illness in Philadelphia. Bishop C. C. J. Carpenter presided over a graveside service at Elmwood Cemetery, where she is interred.