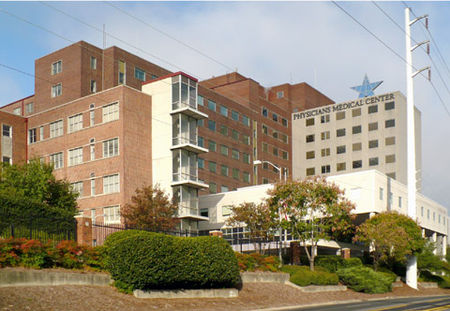 Carraway Hospital (originally Norwood Hospital, most recently called Physicians Medical Center Carraway) was a 617-bed hospital located at 1600 Carraway Boulevard in the Norwood neighborhood of Birmingham. The building was known for its landmark revolving blue star. In 2007, the hospital changed its name from Carraway Methodist Medical Center after a group of doctors purchased the facility out of bankruptcy. The hospital closed its doors on October 31, 2008, after the new investors could not keep the hospital out of bankruptcy.

Carraway Hospital was founded by Doctor Charles Carraway, who contracted with the area's industrial employers to provide health care to workers' families based on a monthly fee. He built a 16-bed infirmary adjacent to his home in Pratt City, then moved in 1916 to the present site in Norwood, calling it Norwood Hospital.

Carraway brought in other doctors to practice under one medical group, inspired by the success of the Mayo Clinic in Minnesota which he had visited numerous times. Incorporated in 1926 as the Norwood Clinic, the physicians group remains the largest single physicians group working at Carraway.

A nursing wing was added to the hospital with a $400,000 federal grant in 1949. After Charles Carraway suffered a stroke in 1957 his son, surgeon Ben Carraway, was appointed by the board to succeed him as chairman.

The 163-room Purcell Wing, opened in 1957 and expanded in 1961, was the first part of a major expansion and renovation of the medical center. The $27 million Goodson Building was completed in 1974, with a display of Charles Carraway's 1903 Cadillac in the lobby.

The hospital began courting possible buyers in 2001, including talks with Ardent Health Services of Nashville, HealthSouth, Tenet Healthcare and others.

In September 2006 the hospital filed for Chapter 11 bankruptcy protection with ownership of the facility placed up for auction. After negotiations with several groups, including Baptist Health System, a group of doctors bidding as Physicians Medical Center LLC submitted a high bid of $26.5 million.

Once the buyout was complete, the new owners changed the name of the hopsital in early 2007. The familiar blue star on the complex was kept, and incorporated into the hospital's new logo. By June of the next year, the hospital turned a small profit, for the first time in many years.

In August 2007, Physicians Medical Center LLC announced its intentions to apply for a Certificate of Need to transfer 135 acute care beds and 30 psychiatric beds from Carraway to a new hospital to be built in the Fultondale or Gardendale area. Site selection was to be completed by April 2008. The group hoped to acquire 40 to 60 acres to accommodate the hospital and physicians' offices. The Carraway facility only uses approximately 200 of its 617 licensed beds, so the shift was not to affect the Norwood campus.

A June 2007 accreditation survey performed by the Joint Commission found 13 areas in which improvements were needed and gave the hospital a "conditional accreditation" report. All of those requirements had been met when an unannounced follow-up inspection was held a year later, restoring full accreditation.

On October 9, 2008, L&B Realty Advisors of Dallas, Texas, the owner of the hospital campus, loaned administrators enough funds to make their payroll. On October 20, the hospital closed its emergency room, stopped taking new patients, and anounced it would be closing for good on October 31. The last patient of Physicians Medical Center Carraway was transferred on October 22. Other area hospitals responded quickly to absorb the additional patient load, particularly for mental health admissions.

Shortly after the hospital's closure, officials from Shinsegae, a South Korean investment firm which had earlier planned to invest in the hospital as a training center for nurses, began planning to purchase and reopen the hospital. That proposal was never realized.

In 2011 the Lovelady Center announced plans to purchase the campus for a new "MetroPlex", at which it could accommodate as many as 1,200 resident clients and partner with other agencies and businesses to serve a larger segment of the community.

In 2018 Lovelady sold the 47.3-acre property to Corporate Realty Development, which is planning a mixed-use development with possible residential, retail, office, hotel and entertainment components, to be called Northside Park. CRD applied for rezoning of the property in November 2020, and has asked the City of Birmingham to consider providing as much as $17 million in tax abatement incentives.