Cathedral of the Cross 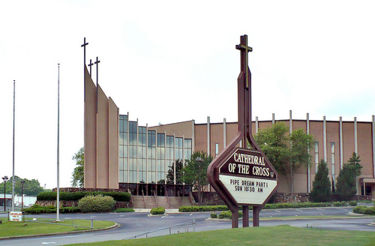 Cathedral of the Cross in 2010

The Cathedral of the Cross (formerly Huffman Assembly of God) was a large congregation affiliated with the Assemblies of God USA church and located at 1480 Center Point Parkway in Birmingham.

The church was founded in 1958 by pastor Dan Ronsisvalle and eventually grew too large for its 1,000-seat sanctuary at 9553 Parkway East. In 1986, the church broke ground for a new $9 million structure at 1480 Center Point Parkway, which facilitated its growth into one of the largest churches in the state, seating as many as 4,000. At its peak, Cathedral of the Cross was the largest congregation in the Alabama District of the Assemblies of God.

In 2011, the church had dwindled to a handful of members, and moved out of the Center Point Parkway location. The remnants of the membership now meet in the Pinson area. In November 2011, the property was sold to the Apostolic Overcoming Holy Church of God, which made the building its new international headquarters.

The facility formerly served as a meeting space for The Basement youth revival meetings.