From Bhamwiki
(Redirected from Catherine Reddick)
Jump to: navigation, search 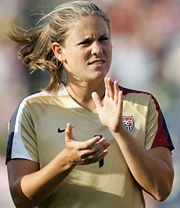 Cat is the daughter of Phillip and Anne Reddick and was born in Richmond, Virginia, but grew up in Birmingham. She played soccer from an early age, winning many awards, and played at Briarwood Christian School. She attended the University of North Carolina at Chapel Hill, a university which has produced several top American players, including Mia Hamm (also from Alabama) and Eddie Pope.

She debuted for the United States women's national soccer team on July 6, 2000 against Italy, and has since become a regular for her national side.

She married Robert Whitehill, a medical student, on December 31, 2005. The couple reside in Durham, North Carolina.

Whitehill is an advocate for the rights of women to participate in sports. On February 1, 2006, she testified at a committee hearing of the United States Senate in support of Title IX, the civil rights law that, among other things, provides women and girls the same opportunities to participate in school sports that boys and men are offered. In her testimony, Whitehill described having to play on boys' soccer teams as a young girl in Alabama because there were no opportunities for girls to play organized soccer there at the time.

Playing with the U. S. team at Legion Field on May 3, 2008, Whitehill scored the first of two own-goals for Australia. The Americans survived with a winning goal in extra time. Whitehill set up the winning play with an assist to Abby Wambach on a free kick. She flicked it to Angie Hucles for the 94th minute goal.

In June 2008, Whitehill suffered a torn ACL in her left knee, which kept her from competing with the U.S. team in the 2008 Summer Olympics in Beijing, China.