the Cobb logo
Center Point Six was a six-screen multiplex located next to the Queensbury Shopping Center in northeast Birmingham, at 700 23rd Avenue Northwest, at the corner of Carson Road. It was opened by Cobb Theatres on June 10, 1983, on the same day as its sister cinema, the Hoover Square 6. 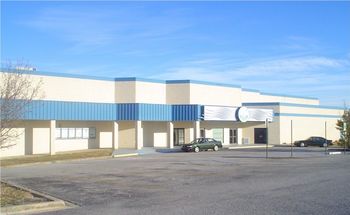 the former CP6
The theatre was a stand-alone structure that faced west, the front of the structure was ornamented with a large marquee in the middle, six illuminated "one-sheet" (poster) cases on the north side, and an illuminated gameroom sign on the south side. It featured four large auditoriums with stereo sound, with screens for both flat and scope projection capabilities. It also contained two smaller auditoriums with only mono sound and only a flat screen.

The box office was a completely enclosed room, equipped with several "Automaticket" machines. The centerpiece of the main lobby was an elongated, octagonal concession stand. Above the concession stand were mirror ceiling tiles encircled by globe light-bulbs. The walls and carpet of the lobby and auditoriums had a blue and brown color scheme. Lining the walls of the lobby were three one-sheet cases on either side, highlighted by track lighting from the ceiling. Leading out from the lobby through a side foyer on the south side of the building, there was the "Cobb Superstar Gameroom." Located adjacent to the gameroom was a large workshop that facilitated the video game division for all area theatres.

The theatre remained mainly unchanged for the duration of its operation, despite other locations being built/refitted to follow the official Cobb color scheme adopted in the late 80's of purple and teal-green. Employee uniforms for most of the duration included a purple golf-style shirt, with the teal Cobb logo over the left breast, black pants, and a matching visor or hat.

Center Point 6 was built adjacent to the Queensbury Shopping center, approximately one mile from Highway 79 and three miles from Center Point Parkway. In the 1970's, most of the area along Carson Road from Bridlewood to Sunhill Road/Jefferson State was cleared off for development. However, only the small parcel between Jefferson State and 23rd Avenue was actually developed, and the rest of the area has remained mostly untouched for over four decades. As the area never developed as planned, the location eventually proved to be a disadvantage not only for Cobb, but also for all of the neigboring buisnesses, including Jack's, Burger King, Sneaky Pete's, Big "B" Drugs and Food World. Although called "Center Point", the theater is actually in the Huffman section of Birmingham, only one block from the current Center Point city limits.

In the late 1980's, the success of Center Point Six and its nearby rival in Center Point, the Consolidated/Carmike Bama 6, had drawn most of the business away from Cinema City 8 in Roebuck. As a result, Cobb changed Cinema City to a second-run theatre that charged a discounted admission price.

A church occupied the building from 2005 to 2010.
Center Point 6 continued to operate until the summer of 1997, when Cobb Theatres sold all of its screens to exhibitor giant Regal Cinemas. Regal decided against keeping the location running, so the theatre's last day of operation was the same as the old Cobb Theatres company: July 31, 1997. Regal did continue to use the property for a little while longer, making use of the video game workshop which continued to service video games for other area locations, until the company began contracting that service out to third party vendors.

The building sat vacant until the early 2000's, when it was converted for use by a church. From 2005 to 2010, it housed the Walking on Water Christian Church, and is currently the home of the Rebirth Christian Fellowship.