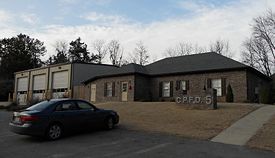 On October 9, 2008, the new Station No. 5 officially opened on the site of the original facility. The new station can handle up to 8 personnel. Prior to completion, firefigthers' quarters were in a FEMA trailer parked in the adjacent garage, constructed in 2007. EMT quarters were in an apartment a few blocks away.

In 2013, Clay annexed the property, including the fire station, into its corporate limits.