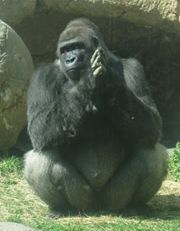 Cenzoo (born February 2, 1996 in Lincoln Park Zoo, Chicago), also sometimes known as Nick, is a silverback Western Lowland Gorilla (Gorilla gorilla gorilla) which was exhibited at the Birmingham Zoo from 2010 to 2015.

Cenzoo was raised by his parents, Koundu and Jo-Ray-K. In April 1996, when Cenzoo was only 10 weeks old, Koundu, Jo-Ray-K, Cenzoo and a fourth gorilla were moved to the new Primate Panorama exhibit at the Denver Zoo. Because he came to the Denver Zoo during its centennial, he was named Cenzoo.

In March 2003, Koundu and Cenzoo were transferred to Busch Gardens in Tampa, Florida as part of the internationally recognized Species Survival Plan (SSP) administered by members of the Association of Zoos and Aquariums (AZA). Koundu had been expected to sire additional children there, but Cenzoo, not yet a silverback, managed to sire a son, Bolingo. Bolingo was the parks' first gorilla birth. Dominance issues later led the separation of Cenzoo and Koundu while there. Cenzoo also appeared as the younger of two gorillas in a Bud Light commercial that debuted during Super Bowl XLI in 2007.

Cenzoo and Koundu were transferred to the Birmingham Zoo in 2010. Koundu died during a medical examination in September 2011.

In 2015 Cenzoo was transferred to the Riverbanks Zoo and Garden in Columbia, South Carolina as part of the Association of Zoos and Aquariums' Species Survival Plan.