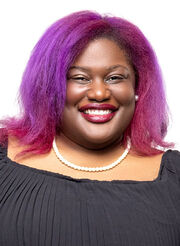 Cerissa A. Brown (born June 19, 1980 in Mulga) is an entrepreneur and advocate for mental health.

Brown grew up in Pratt City and West End. She attended Jackson Elementary School and later went to Vestavia Hills High School where she was active in the concert and marching bands. She graduated in 1998 and attended Alabama State University for a year.

After leaving school Brown worked for furniture brand Gabriella White. She worked as a customer relations associate for Blue Cross and Blue Shield of Alabama from 2008 to 2011, and then took on the position of director of retail and consumer engagement for Entwine Couture Beauty of Chicago, Illinois. She completed a certificate in women's entrepreneurship through Cornell University's Bank of America Institute in 2021.

Brown served on the junior board advisory committee for Red Mountain Park. She was elected vice president of the Chi Sigma chapter of the National Philo Affiliates of Sigma Gamma Rho Sorority, and has worked to organize a march against gun violence and a feminine hygiene products drive to benefit clients of First Light Shelter. She has also published a fitness weblog on the Kindle Blogs platform and founded the Birmingham Chapter of the Little Black Dress Club.

Brown participated in the 2021 cohort of Emerge Alabama, which recruits Democratic women to run for public office. She challenged incumbent Mayor of Birmingham Randall Woodfin in the 2021 municipal election. In her campaign she promised more government transparency, reduced police brutality, and better access to mental health resources and affordable housing. She was endorsed by the Palo Pinto, Texas-based Future Generations PAC.