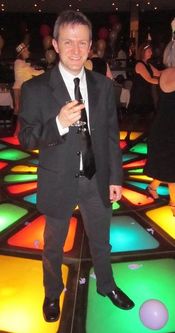 Charles Buchanan at The Club, December 2010

Charles Buchanan (born January 5, 1973 in Selma, Dallas County) is an artist and the editor of UAB Magazine.

Buchanan's family moved all over the South during his childhood. He represented Louisiana in the National Spelling Bee in 8th grade, shortly before moving to Birmingham. He graduated from Hewitt-Trussville High School in 1989 and completed a bachelor's degree at the University of Alabama. He served as managing editor of UAB Medicine before being promoted to his present post in February 2014.

In 2010, Buchanan wrote an article on fading advertising signs for Birmingham magazine, which led to a publishing deal with The History Press. The book, with photographs by Jonathan Purvis, was published on November 1, 2012.