This article is about the physician and Confederate captain. For others by that name, see Charles Drennen (disambiguation). 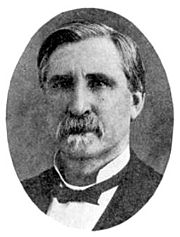 Charles Travis Drennen (born September 6, 1842 in Walker County; died 1913 in Florida) was a physician and the founder of the Walker County Medical Society.

Drennen was the son of Reverend Walter and Matilda Cornwell Drennen and the brother of Mel Drennen, Mayor of Birmingham from 1899 to 1905. Charles grew up in Walker County and attended the University of Alabama until the start of the Civil War. He enlisted in the company of F. A. Gamble and was elected first lieutenant for Company F of the 28th Alabama Infantry, commanded by Colonel John Frazer. He served in the siege of Corinth, Mississippi and in General Bragg's invasion of Kentucky. He was promoted Captain for his meritorious conduct in the Battle of Murfreesboro on December 31, 1862 and succeeded Gamble, who resigned to take a judgeship in Walker County. He went on to command his company at Chickamauga and Chattanooga, but was captured at Missionary Ridge in November 1863 and held captive at Johnson's Island until the end of the war.

During the war he had married Elizabeth Wilson. The couple eventually had five sons (C. Travis, Daniel, Felix, Jesse and Walter) and a daughter.

In 1867 Drennen began studying medicine under local physicians and by attending lectures in Baltimore and Mobile, graduating from the Alabama Medical College there in 1873. He organized the Walker County Medical Society a year later and served twice as president, with his practice in Arkadelphia.

After taking a post-graduate course at the New York Polyclinic in 1885 he moved with his family to Birmingham and became a leading practitioner with memberships in the Alabama Medical Association and Jefferson County Medical Society. His two oldest sons, Travis and Daniel, practiced with him as partners at various times.

Drennen died in Florida in 1913 and is buried at Greenwood Cemetery in Orange County.