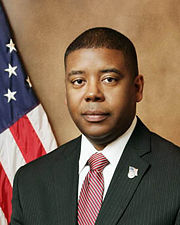 Charles E. Samuels, Jr (born c. 1965 in Birmingham) is the director of the United States Bureau of Prisons. A long-time bureau employee, he was appointed director on December 21, 2011 by Attorney General Eric Holder.

Samuels, the son of federal employees, grew up in Forestdale. He attended Minor High School before graduating from Ensley High School. He earned a degree in social and behavioral sciences from UAB in 1987 and began working as a corrections officer for the Bureau of Prisons in 1988. He has worked in prisons in Talladega, Alabama as well as in Georgia, Arizona, California, New York, West Virginia, Kentucky and New Jersey. He served as warden for prisons in Manchester, Kentucky and Fort Dix, New Jersey.

Samuels and his wife, Tonya, have one daughter, Amber.