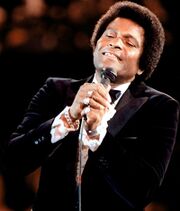 Charley Frank Pride (born March 18, 1934 in Sledge, Mississippi– died December 12, 2020 in Dallas, Texas) was a country star and one-time Birmingham Black Barons pitcher. As a musician he recorded 52 Billboard Top 10 songs, including 30 #1 hits and was named Entertainer of the Year for 1971 by the Country Music Association. He was a member of the Grand Ole Opry and the Country Music Hall of Fame.

Pride was born the fourth of eleven children to a sharecropping family in Quitman County, Mississippi. He spent his days playing baseball with his brothers, and also taught himself to play a guitar his mother gave him when he was 14. He left high school in Clarksdale to try out for the Memphis Red Sox of the Negro American League as a pitcher. After a year in a semi-professional league in Iowa he made the team in 1952. The following year signed a contract with the Boise Yankees of the Class C Pioneer League. An injury suffered that year affected his pitching and he was sent down to the Fond du Lac Panthers of the Class D Wisconsin State League. He returned to the Negro Leagues with the Louisville Clippers, and then was traded, along with Jesse Mitchell, to the Birmingham Black Barons in exchange for used bus in 1954.

During the 1954 season Pride went 4-2 as a pitcher, and also played in left field. He hit a 370-foot home run against his former Memphis team-mate Eddie Hancock. Pride returned to Memphis for the 1955 season, but was drafted into the Army in 1956. He married the former Ebby Rozene Cohran, whom he had met in Memphis, while on Christmas leave. Pride was assigned quartermaster duties at Fort Carson, Colorado and starred for the unit's baseball team, which won the "All Army" sports championship. He returned to Memphis after his discharge in 1958, but was cut at the end of the season. While visiting Rozene in Memphis he recorded a few songs at Sun Studios.

He joined the Missoula Timberjacks if the Pioneer League in 1960 and tried out unsuccessfully for the California Angels and New York Mets. When the Timberjacks cut him he took a construction job in Helena, Montana. He was recruited to play semi-professionally, for $10 per game, for the East Helena Smelterites, and given a job with the American Smelting and Refining Company which adjusted his schedule to allow him to play. The team manager offered Pride an additional $10 to sing before each game, boosting attendance. He formed a band called the "Night Hawks" which performed for company picnics and other events. With the support of Chet Atkins, Pride signed a record contract with RCA Victor in 1965. His first single, "The Snakes Crawl at Night," was released in 1966, with no mention in promotional materials that Pride was Black. When he walked on stage at Detroit's Olympia Stadium that summer, he told a stunned audience, "Friends, I realize it's a little unique, me coming out here— with a permanent suntan— to sing country and western to you. But that's the way it is." 1.

Pride's third single, "Just Between You and Me," was his first to chart, reaching #9 in February 1967 and earning him a Grammy nomination and an invitation to appear at Nashville's Grand Ole Opry. He was able to bring his family to join him in Helena, soon relocating to Great Falls to be closer to the airport. Two more children soon followed.

In 1969 Pride and his family moved to Texas. Over the next two years his career reached extraordinary success with 8 #1 hits just as country music's Nashville sound was staking out widespread popularity. His "Best of" album, released in 1969, sold more than a million copies and Pride was eclipsed only by Elvis Presley for sales of RCA Victor records.

In 1971 Pride's hit, "Kiss an Angel Good Mornin'" sold a million copies and appeared on the country, pop and adult contemporary charts, making him a household name. He was named "Entertainer of the Year" by the Country Music Association. He was presented with the Willie Nelson Lifetime Achievement Award at the 2020 CMA Awards.

Pride embarked on his first overseas tour in 1976, including four dates in conflict-ridden Northern Ireland. He performed the national anthem for Super Bowl VIII in Houston, Texas; for game six of the 1980 World Series in Philadelphia, Pennsylvania; and again, as part owner of the Rangers, for game five of the 2010 World Series in Arlington, Texas.

In 1997 Pride underwent successful surgery to remove a tumor from his right vocal cord at the University of Arkansas for Medical Sciences. In 2003, a 33-mile stretch of Mississippi Highway 3 from Sledge to Tutwiler was dedicated as "Charley Pride Highway". On February 26, 2006 Pride returned to Birmingham to appear at a 1940s throwback game staged by ESPN at Rickwood Field featuring amateur players in the uniforms of the Birmingham Black Barons and Bristol Barnstormers.

Pride died at home in Dallas on December 12, 2020, of complications related to COVID-19. He was 86 years old. He was survived by his wife, Rozene, three children, five grandchildren and two great-grandchildren.