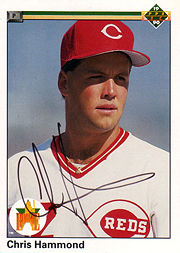 Hammond graduated from Vestavia Hills High School in 1984 and went to the University of Alabama at Birmingham to play for the Blazers. Hammond was drafted by the Cincinnati Reds in the sixth round of the 1986 amateur draft. Hammond had not sustained considerable success until his revival as a relief pitcher with the 2002 Atlanta Braves. Hammond's career went through two distinct phases, one as a struggling starting pitcher/swing-man and one as a reliever. Hammond used techniques common to junk-baller or finesse pitchers. His pitches included the changeup (Hammond's ranged from 58 - 71 mph), his mostly flat slider, and his low 80s 4-seam fastball. Hammond was also a relatively good left-handed hitter because of his career .202 batting average, .285 on-base percentage, and four career home runs.

Hammond first appeared in the Major Leagues in 1990 where he pitched three games for the Reds. The following season was his official rookie season and he started 18 games and went 7-7 with a respectable 4.06 ERA. His first stint with the Reds would come to a close in late March 1993 as he was traded to the Florida Marlins for Hector Carrasco and Gary Scott.

Hammond was a member of the inaugural Marlins team that began play in Major League Baseball in 1993. Hammond had an eventful career with the Marlins. In his inaugural season as a Marlin, he hit two home runs (one a pinch-hit grand slam), and pitched his way to a 4.66 ERA in 191.0 innings. In 1994, he experienced somewhat more success (a 3.07 ERA) in a season shortened by injuries. After a mediocre 1995 season, Hammond's career seemed to hit a nosedive. His first stint with the Florida Marlins would end in 1996, where he totaled a 6.56 ERA and would face a demotion to the bullpen.

Hammond signed with the Boston Red Sox in 1997, intending to return to his role as a starter. Instead, Hammond had yet another disappointing season as a relief pitcher. In an interview in Yankees' magazine during 2002, Hammond revealed that the Red Sox offered this promise as a ruse to sign him. While Hammond's career was seemingly reaching its end, the Florida Marlins would win the 1997 World Series.

Hammond made a comeback attempt in 1998. After being signed to a contract by the Kansas City Royals, he was granted his release towards the end of spring training. Once again, as in 1993, the Marlins obtained him just in time. Hammond returned to the Major Leagues for three starts, gaining a 6.56 ERA in 13.2 innings. After this brief comeback attempt, Hammond had to have shoulder surgery, and he retired for the first time. Hammond had earned over five million dollars in his playing career to that point, and returned to a quiet family life back in Alabama. He purchased a 200+ acre horse-ranch with a 60 acre lake where he routinely went fishing. Despite enjoying his retirement, Hammond returned to baseball in 2001 at the request of his wife and children.

Hammond returned as a minor league player for the Cleveland Indians. At mid-season, he was released by the Indians and then signed to yet another minor league contract with the Atlanta Braves. Though Hammond would only experience a modicum of success in the minor leagues, he was primed for a resurgence in 2002. Signed to another minor league contract, Hammond had the chance to pitch with his "home-town" Atlanta Braves in 2002. Hammond would make the major league roster in 2002. In 2002, Hammond pitched 63 games, 76.0 innings, with an 0.95 ERA. Only four pitchers (including Hammond) had ever had a sub-1.00 ERA while pitching over a full season with over an inning an appearance (the latest pitcher to join this exclusive club was Jonathan Papelbon in 2006). Hammond also had a streak of nearly thirty consecutive scoreless innings during the stretch in order to achieve this historic mark. Hammond would routinely pitch an inning or two after Greg Maddux's shortened starts. Despite Hammond's 6.75 ERA in three appearances during the 2002 National League Division Series, the New York Yankees signed Hammond to a multi-year contract.

In 2003, Hammond became a member of the New York Yankees. Despite success on the mound, Hammond still had a tough season albeit in ways not directly related to his performance. Hammond was immediately opened to criticism as he replaced the fan-favorite incumbent Mike Stanton as the left-handed setup man in the Yankees' bullpen. Joe Torre tried to use Hammond as a LOOGY (left-handed specialist) because Torre's bullpen lacked any other left-handed pitchers. However, this nullified one of his most effective pitched, the change-up. Despite being put into situations where he was likely to fail, he allowed the lowest percentage of inherited runners to score in the 2003 Yankees bullpen along with a 2.86 ERA. Despite being successful, his failures were memorable. Fans loathed Hammond, believing he could never live up to Stanton's reputation. Hammond also received much media criticism when he called out the fans for jeering his teammate Antonio Osuna despite the fact that Osuna had a 2.25 ERA as he left the game. Hammond grew increasingly unpopular after he surrendered a grand-slam to Red Sox catcher Jason Varitek. After this, Hammond would be relegated to mop-up duty. He only had one appearance during the 2003 postseason, pitching two innings without giving up an earned run during the World Series.

Hammond was quickly traded to the Oakland Athletics during the 2003-2004 off-season. Despite turning in a 2.68 ERA in 2004, Oakland Athletics manager Ken Macha alike Joe Torre did not trust Hammond in the set-up role. Hammond was not suitable as a LOOGY, so he was relegated to pitching when his team was behind. Hammond would also miss time during the season due to a recurrence of shoulder injuries. (The injuries which originally took him away from baseball in 1998).

In 2005, Hammond signed with the San Diego Padres. Returning to the National League, he got off to a hot start with the Padres. Despite surrendering a few gopher-balls, Hammond pitched with a WHIP under 1.00 until shoulder injuries nagged him once again. Despite being trusted in important roles once again, Hammond would finish the season with an ERA nearly equivalent to the league average.

Hammond went full-circle in 2006, returning to Cincinnati where his career started. However, Hammond's return was short-lived. The left-hander was designated for assignment on June 30 2006. Hammond would end his 2006 season with the Reds with a 6.91 ERA in 28.2 innings pitched. Despite low walk rates (5 walks, 23 strikeouts), Hammond surrendered too many hits to be successful.