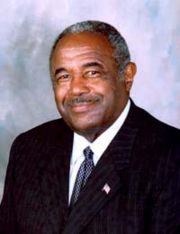 Jewell Christopher McNair (born 1926 in Fordyce, Arkansas; died May 8, 2019) was a photographer, a state legislator and a Jefferson County Commissioner. His daughter Denise was killed in the 1963 bombing of Birmingham's 16th Street Baptist Church.

McNair was a graduate of Tuskegee Institute, where he met Maxine Pippen in 1945. He served in the U.S. Army during the later months of World War II before returning to college, graduating in 1949. He and Maxine were married in 1950 and moved to Birmingham, where he worked as a milkman. Denise was born in 1951.

McNair opened a photography studio in 1962. Chris McNair Studios on 6th Avenue South in South Titusville later expanded into a multi-faceted business including a frame shop, art gallery and meeting space. A small exhibit area in the gallery served as a memorial to Denise's memory. McNair's two other daughters, Lisa and Kim, both worked in the gallery.

McNair was elected to the Alabama House of Representatives in a 1973 special election to fill a vacancy in the Jefferson County House Delegation. He served two terms in the state legislature, including one as chair of the county delegation. He then ran unsuccessfully against Richard Shelby in the 1978 Democratic Primary to represent the 7th Congressional District of Alabama in the U.S. House of Representatives.

McNair began serving on the Jefferson County Commission in 1986. During that decade then film-student Spike Lee contacted him to ask about obtaining the film rights to his daughter's story. McNair declined, but later, as the 33rd anniversary of the bombing approached in 1996, he and Maxine agreed to work with him and sit down for lengthy interviews which were featured in the documentary film 4 Little Girls which was released in 1997.

McNair resigned from the County Commission abruptly on March 29, 2001. Governor Don Seigelman appointed Steve Small Jr to succeed him. He again challenged Richard Shelby, this time for his U.S. Senate seat, in the 1992 Democratic primary, but garnered only 28% of ballots. At the time of retirement, McNair's reputation was of a fair-minded and penny-pinching public servant who brought dignity to his office. On the other hand, he had been the commissioner with responsibility over the Jefferson County Sewer System, which proved to be inadequate to the task of keeping wastewater out of rivers and streams during periods of heavy rain.

Once a lawsuit against the county was settled by consent decree, McNair took charge of the estimated $1.2 billion project of improving the system. The project was marked by poor planning and mismanagement. On April 21, 2006 McNair was convicted on 11 counts of bribery and conspiracy involving contractors for the sewer project. He pleaded guilty to a twelfth count of conspiracy in February 2007. On September 19, 2007 he was sentenced to five years of prison and ordered to pay $851,927 in restitution. After his appeals failed, McNair reported to federal prison in Marion, Illinois on June 6, 2011. From there he was transferred to the Federal Medical Center at Rochester, Minnesota.

He had been scheduled for release on October 13, 2015, but was released early, on August 29, 2013 under a Federal Bureau of Prisons policy to release elderly or sick inmates convicted of non-violent offenses after they serve a majority of their sentence. Doug Jones represented him on his petition for early release. He was freed in time to participate in events honoring the 50th anniversary of the bombing that killed his daughter.

McNair died in May 2019. Though the McNairs had changed churches in 1983, 16th Street Baptist Church hosted his memorial service, in accordance with his wishes, on May 17.