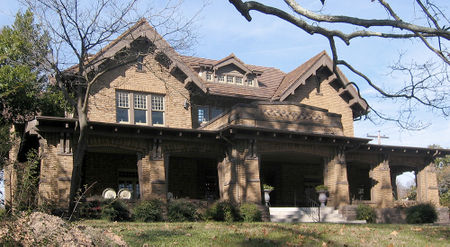 The Women's Club House in December 2005

The Clubhouse on Highland, formerly the Women's Club House was built in 1910-1911 as the W. S. Brown residence at 2908 Highland Avenue.

The two-story arts and crafts-style brick home with a deep verandah on two sides was designed by architect William Weston for William S. Brown, president of the W. S. Brown Mercantile Company. The builders were David and John Evans of Evans Brothers Construction Company, who completed the work to a very high level of craftsmanship for a cost of $24,000. Neighbors came over during construction to gawk at the house's several marble baths. The connecting reception rooms on the ground floor allowed Mrs Brown space to "constant" entertaining.

The house was occupied by Brown and his descendents, including the family of Samuel Caldwell, a vice-president for W. S. Brown who married his daughter, Bessie. Lura Brown Fowlkes was the last of the family to reside in the house.

On August 16, 1947 it was sold to the 3rd District of the American Federated Women's Club and became that group's Women's Club House.

Bob McKenna, who, at the suggestion of Nina Miglionico, became involved with helping the club maintain the property, purchased the house in 2004 and acts as caretaker for the club, which continues to hold meetings and events as "The Clubhouse on Highland". He oversaw an extensive project of restoration and uncovered a few interesting artifacts, including some early 20th century glass bottles in the basement, and a series of Women's Club scrapbooks stored in a built-in seat on the 2nd floor landing.

The house was the subject of episode 1409 of the Home and Garden Television series "If Walls Could Talk", which aired on September 3, 2006 and served as the setting of Yuri Shapovka's 2013 feature film "Clubhouse".