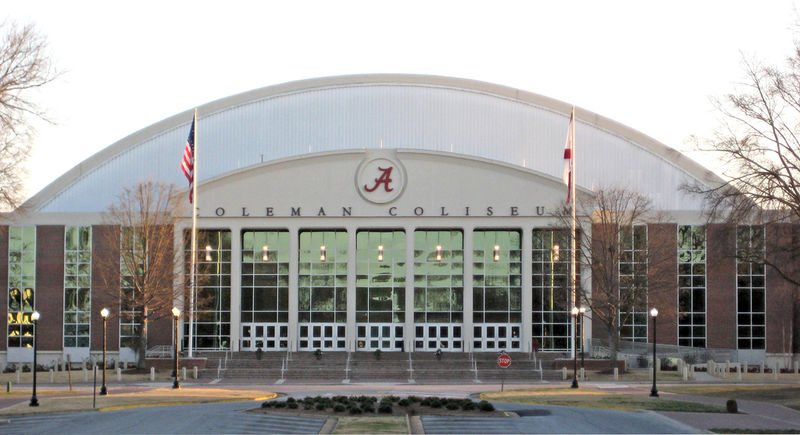 Front of Coleman Coliseum in March 2008

Coleman Coliseum is a 16,000-seat, 93,000 square-foot multi-purpose arena on the campus of the University of Alabama in Tuscaloosa. It was constructed in 1968 as "Memorial Coliseum" and replaced Foster Auditorium as the home court of the Alabama Crimson Tide men's and women's basketball teams, as well as the gymnastics and volleyball teams.

The building, originally referred to as a "field house" was designed by the Birmingham architecture firm of Miller, Martin & Lewis and was built by Daniel Construction at a cost of $4.2 million. The building was financed with athletic gate receipts, student activity fees, and a field house endowment fund.

When it opened, it was the fifth-largest on-campus arena of its type, behind Kentucky, Illinois, Minnesota and Butler. It was named "Memorial Coliseum" in honor of the students from the University of Alabama who gave their lives in service to their country in World War I, World War II, the Korean War and the Vietnam War.

The 16,000 seat arena (15,383 for basketball) has a curved ceiling finished with alternating bands of crimson and white acoustical tiles. The concrete barrel-vaulted frame provides a clear span of 262 feet by 353 feet, with the center 90 feet above the court floor.

The building also contains an auxiliary gymnasium, offices for the University of Alabama Athletics Department and various support facilities such as ticketing and Tide Pride offices, equipment and weight rooms, steam baths, training rooms, food service areas, photography studios and locker rooms for staff and athletes. Reception rooms are provided for use by the "A Club" (now the Crimson Tide Room) and the President of the University (now the C. M. Newton Room). A tunnel accessible from the lower level on the west side leads to the football practice fields.

The building opened for the first time for a tour of the Broadway show "The Roar of the Greasepaint - The Smell of the Crowd" on January 30, 1968. The men's basketball team hosted the Samford Bulldogs there two night later. On the night of February 7, 1970 Louisiana State's Pete Maravich scored 69 points in a 106-104 loss to Alabama. The arena has hosted NCAA Men's Basketball Tournament sub-regionals twice, in 1975 and 1981, and hosted the regional tournament in 1974.

Among the many major concerts at the Coliseum that decade were three by Elvis Presley and one each by the Grateful Dead and Led Zeppelin. President Ronald Reagan stopped at Memorial Coliseum during his 1984 re-election campaign. The facility has also been used for opera and ballet performances, large student and alumni convocations, and commencement ceremonies.

The arena was renamed for Jefferson Coleman in 1988. It underwent a $24 million renovation in 2005. In 2005 the women's volleyball team began playing in the Coleman Auxiliary Volleyball Extension (CAVE). In 2010 Foster Auditorium was renovated and returned to hosting women's basketball and volleyball games in 2011. A new center-hung scoreboard was installed at Coleman Coliseum that year, taking the place of four scoreboards hung on the walls behind the end lines.