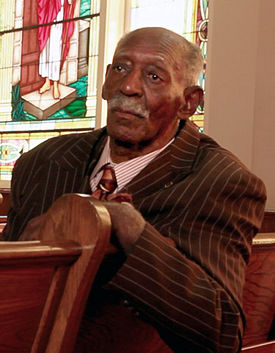 Johnson was the son of Colonel and Fannie Johnson. His father was named for Union Colonel William R. Brewster, who served at Gettysburg. The family moved to Birmingham in 1922 and he attended Slater Elementary School and graduated from Lincoln High School in 1939. During high school he worked for the Bowden Trucking Company and after graduation became an employee of the Louisville & Nashville Railroad, where he worked for 39 years. Johnson married the former Beatrice Yancey in 1942.

At the railroad, Johnson became active in labor issues as a union representative, assisting in a lawsuit filed against the railroad by Pullman car porters. He became acquainted with Alabama Christian Movement for Human Rights founder Fred Shuttlesworth in 1956 and joined the emerging Civil Rights Movement.

After the bombing of Shuttlesworth's home that Christmas, Johnson helped put together a volunteer security detail, later called the Civil Rights Guards, which kept watch over churches, businesses and homes connected to the movement. He served as Shuttlesworth's personal bodyguard in Birmingham, and helped remove dynamite from near Bethel Baptist Church when another attempt was made to destroy it in June 1958. When keeping watch, he carried what he referred to later as a "nonviolent .38 police special."

In 1977 Johnson testified against National States Rights Party official J. B. Stoner, who was convicted of conspiring to plant the second bomb at Bethel in 1958.

Johnson retired from L&N in 1979. He has volunteered at the Birmingham Civil Rights Institute since its opening in 1993, leading tours around Kelly Ingram Park and sharing his personal recollections of the movement in Birmingham with visitors from across the country. In 2006 he accepted the Robert P. Bynum Award from the UAB Center for Aging, a recognition for seniors who are "actively engaged in activities that enhance the health or well-being of other older adults." After Shuttlesworth returned to Birmingham in 2007, Johnson visited with him daily.

A section of McMillon Avenue between 2nd Street Southwest and Lomb Avenue was dedicated in Johnson's honor in 2011.

Johnson died in 2012, 7 months after his wife, at Princeton Baptist Medical Center. After a funeral service at Mount Calvary Baptist Church he was buried at Elmwood Cemtery.