The Colonial Stores chain of grocery stores operated across the South. The chain was founded by combination of two grocery chains both owned by National Food Products. David Pender of Norfolk, Virginia and L. W. Rogers of Atlanta, Georgia operated their own stores and jointly opened the self-service Little Star neighborhood groceries and Big Star Foods supermarkets. After World War II, National Food Products modernized most of its stores to self-service and consolidated the chain under the "Colonial Stores" banner. They introduced the familiar rooster-shaped logo on August 3, 1947.

In 1962 the chain relaunched the Big Star Market nameplate as a low-margin discount grocery chain. All of the company's stores were sold off or converted to Big Star Markets in the 1970s, and the chain itself was sold to Grand Union in 1977, with that company pulling out of the southeastern market by 1988. 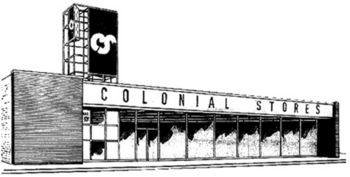