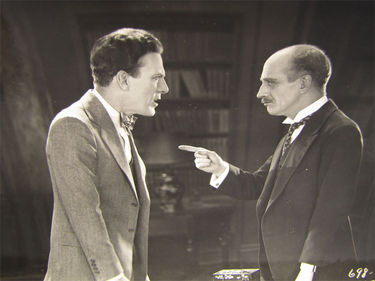 Publicity still of Thomas Meighan and John Miltern in Coming Through

Coming Through was a 1925 silent feature film based on reporter Jack Bethea's melodramatic novel Bed Rock which was set in the Cahaba coal fields south of Birmingham.

Rights to the story were bought by the New York-based Famous Players-Lasky Corporation, parent to Paramount Pictures. Paul Schofield adapted the story into a screenplay. Jesse L. Lasky brought the production to the Birmingham District for location filming in the autumn of 1924. Director A. Edward Sutherland and stars Thomas Meighan, Wallace Beery and Lila Lee stayed with families in Brookside while they completed the filming of exterior scenes in Brookside, New Castle and in mining camps along Oxmoor Road. 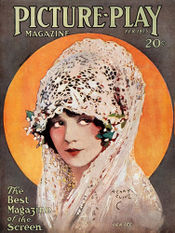 Meighan played the typical "quiet and strong, kindly and brave" hero, Tom Blackford, who marries a reluctant mine owner's daughter, Alice Rand (Lee). The owner, John Rand (played by John Miltern) makes Blackford a mine superintendent, hoping to see him fail. To hasten his downfall, he hires Joe Lawler (Beery) to make life miserable for Blackford. Lawler conspires with a saloon keeper, Munds, (Laurence Wheat) to provoke a strike. Blackford manages to foil the scheme, however in the culminating fight sequence, Lawler gets thrown off a mine tipple when his crowbar gets caught in the conveyor. In the end, Alice confesses her love for him.

Other cast members included Frank Campeau as Shakleton, Gus Weinberg as Doctor Rawls, and Alice Knowland as Mrs Rawls. Beery made a habit of frequenting Brookside's saloons during filming and nearly died filming the stunt where he falls from the mine tipple. Faxon M. Dean was the cinematographer. The film premiered on February 17, 1925 at the Rialto Theatre in New York City.

The film was generally panned by critics. Mordaunt Hall, the New York Times critic, opened his review with this encouragement: "If there are a fèw persons who have found that suspense to photoplays has a deleterious effect upon their nerves, they can go to the Rialto this week with the reassurance of not being unduly excited by the feature, 'Coming Through'." He later added that "This narrative is as flat as the proverbial pancake, with only a few scenes of a coal mine to relieve its monotonous trend."

The 7-reel film quickly fell into obscurity, and all prints appear to have been lost.