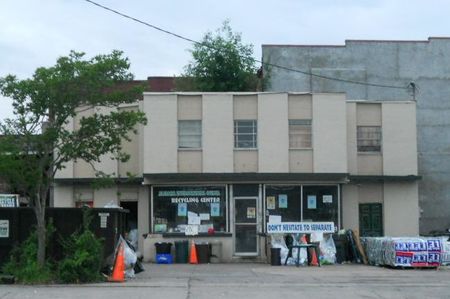 The Community Recycling & Resource Center (formerly the AEC Recycling Center) was a non-profit drop-off recycling center operated by the Alabama Environmental Council from 1973 to 2018.

The establishment of a recycling center was led by AEC treasurer and co-founder Bob Burks, and he served as its director from 1974 to 1977. From 2004 to 2018 the Center's coordinator and manager was Dan Tenpas.

From 1980 to 2015 the center was located at 2431 2nd Avenue North, on the southwest corner of the intersection with 25th Street North, adjacent to Massey's Corral. The redevelopment of Birmingham's loft district put pressure on the AEC to relocate its recycling center. In 2007 there was discussion of moving it to the former Parisian warehouse at 11th Avenue North and Carraway Boulevard. It moved in early 2016 to 4330-4350 1st Avenue South in Avondale.

One factor in choosing a new location was the ability to load crushed glass directly onto a long-haul trailer to maintain the cost-effectiveness of recycling used glass. With grant funding from the Alabama Department of Environmental Management, the center purchased a refurbished glass crusher which produced glass "gravel" used as landscape fill and for pipe bedding.

The center collected all types of glass, paper, cardboard, metal cans, and plastic bottles. It also accepted cell phones and printer cartridges. In early 2008 the center began accepting all types of plastics. Most recyclables were delivered to Birmingham Recycle & Recovery for processing. By its own calculations, the center processed an average of 600 tons of material each year, saving approximately 1,500 cubic yards of landfill space and reducing the need for raw materials extraction, processing and transportation significantly.

After moving to its Avondale location, the Community Recycling & Resource Center began hosting educational tours. A 1.5 kW rooftop photovoltaic system was donated to the center by Eagle Solar & Light as a demonstration project. Other plans for future expansion included a retail shop for usable items brought for recycling and for artwork incorporating recycled materials.

In January 2018 China began curtailing the importation of recycled materials, which eliminated much of the worldwide market. The AEC scaled back its drop-off hours to just one day a week, then decided to close, effective December 13. The unused facility was sold to Duffy's Garage in 2019.