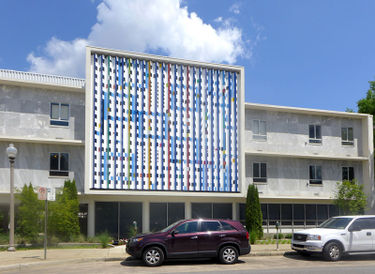 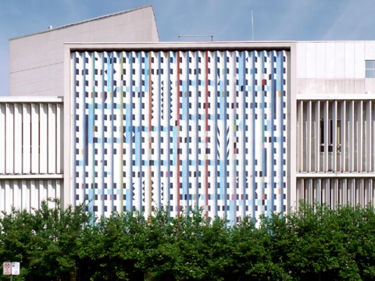 Complex Vision is a large outdoor op-art installation at the Callahan Eye Foundation Hospital on University Boulevard. The work, 30 feet x 30 feet and weighting 3,450 pounds, was created by artist Yaacov Agam in 1969 specifically for the site. The piece is made up of 69 aluminum panels forming an angle with two painted surfaces, for a total of 138 separate planes. The accordion-fold arrangement of the panels creates a lenticular effect, meaning that the composition and colors change as the viewer passes by.

Donors for the work, currently valued at $11.9 million, included Mr. & Mrs. Marvin Engel, Carl Jernigan and William Hulsey. Hulsey and Jernigan, along with fellow trustee Alston Callahan selected the artist and commissioned the work. Callahan had noted how European clinics often displayed large scale artworks indicative of their missions. He wanted a striking and attractive artwork at the eye hospital as a treat for patients.

The work was dedicated in honor of the Engel's parents in 1976 and was featured on the cover of South Central Bell's July 1977 Greater Birmingham telephone directory. The artwork was periodically cleaned and polished.

In November 2013, a major restoration of the piece was announced, with the blessing of Agam. The artwork was removed by Art Creations and Renovations of Florida for stripping, priming, sealing and repainting with the artist's specified colors. It was re-installed in May 2015, and signed again by Agam on July 1 of that year.