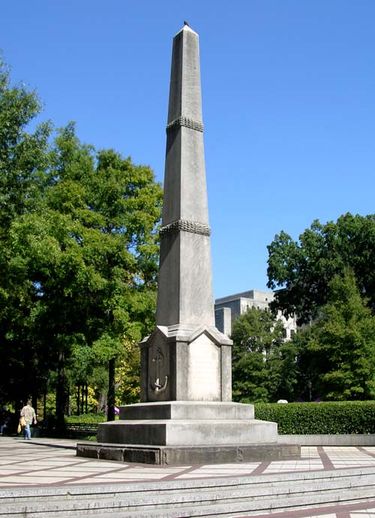 The words attributed to Davis quote a letter he wrote to the Committee of Chattanooga Monument dated April 5, 1877, published in the The Wilmington Morning Star on May 22 of that year.

In 2015, in the wake of a mass shooting at an African Methodist Episcopal church in Charleston, South Carolina, activist Frank Matthews and others called for the monument to be removed on the grounds that its depiction of deadly weapons alongside quotes from Jefferson Davis were offensive, and that its sentiment has nothing to do with Birmingham, which was founded six years after Lee's surrender. The Birmingham Park and Recreation Board voted on July 1 to pursue relocating the monument by consulting with attorneys and with the United Daughters of the Confederacy.

A group called "Save our South" filed a lawsuit against the Park Board and City Council seeking a restraining order to prevent the board from removing the memorial. Jefferson County Circuit Court Judge Mike Graffeo dismissed the suit in November.

On August 15, 2017, in the wake of a violent rally of white nationalists gathered to oppose the removal of a statue of Robert E. Lee in Charlottesville, Virginia, Mayor Bell ordered that the monument should be covered and walled off until a legal means of removing it could be established. Alabama Attorney General Steve Marshall then filed suit against the city, claiming that the action violated the recently-passed law. A hearing in that case was held on April 13 before Judge Graffeo. He issued a ruling shortly before his January 2019 retirement from the bench voiding the 2017 law on the basis that it attempted to restrict the right of the citizens of Birmingham to speak collectively through their city government, and that it deprived the city of the right of due process. Activist Frank Matthews responded to the ruling by calling for the Birmingham Board of Parks and Recreation to remove the monument immediately. 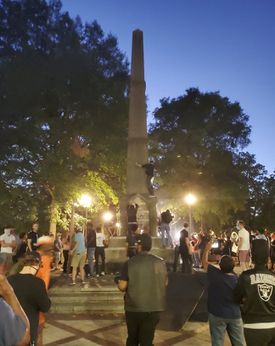