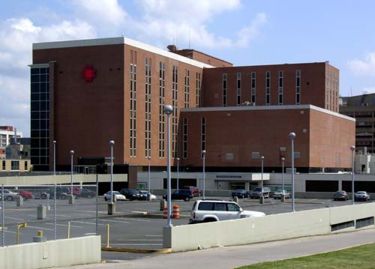 The hospital was scaled back to an urgent care facility without overnight beds on January 1, 2013 as part of the fallout from the Jefferson County debt crisis. The facility was then operated by the Jefferson Health System.

Funding for indigent care was established by the Alabama legislature in 1965, using revenues collected from county sales and liquor taxes. As a county hospital, Cooper Green Mercy provides health-care services to all Jefferson County residents with fees based on family size and income. In addition to staff physicians, the hospital coordinated with UAB Hospital as a training site for medical residents and to provide patients with diagnostic tests, trauma care, and other procedures outside of Cooper Green Mercy's capabilities. Though once licensed for 319 beds, by the mid 2000s, less than half that number were staffed, and the hospital served an average of 60 inpatients per day. Its emergency room handled as many as 35,000 patients per year.

Max Michael served as administrator until 2000. He resigned after his recommendation that the facility stop providing hospital services and serve entirely as an outpatient clinic was rejected by Commissioner Jeff Germany. The hospital's executive director from 2001 to 2012, was Sandral Hullett. She was laid off along with 210 employees in the cost-cutting plan implemented that year.

In February 2004 the hospital was placed under the aegis of the Jefferson Metropolitan Health Care Authority, created by Jefferson County Commission president Larry Langford to allow for more flexible management and increased Medicaid claims. The authority became inactive in 2007 and management reverted to the existing health system. In May 2009 Birmingham mayor Larry Langford suggested that the city of Birmingham take over operation of the hospital, predicting that the county would try to shut it down amid cost-cutting measures in the wake of its massive debt crisis.

From October 2005 to March 2008 the hospital underwent a $28 million program of extensive renovations and modernization of systems, focusing on patient care rooms and public areas of the hospital. Brasfield & Gorrie was general contractor for the project.

In June 2010, with the Commission proposing to sell the Jefferson Rehabilitation and Health Center, several candidates in the 2010 election indicated that privatizing Cooper Green could be necessary. In 2011 Commissioner of Finance Jimmie Stephens recommended that the hospital be prevented from drawing from the county's general fund to meet month-to-month expenses.

In late 2012, despite objections from community activists, the Jefferson County Commission voted to end inpatient care at Cooper Green Mercy Hospital, reducing staff and operating as a primary and urgent care clinic.

In April 2019 the County Commission debated a proposal to transfer the operations of Cooper Green Mercy Health Services to the UAB University Healthcare Authority, which was created by UAB under the University Authority Act of 2016 for a 40-year term, renewable for two additional 10-year terms. The Authority's seven members and its president are all appointed by UAB.

The agreement was passed by a 3-2 vote, with Jimmie Stephens, Joe Knight and Steve Ammons in favor; and LaShunda Scales and Sheila Tyson opposed. The County will leverage its indigent care fund to finance construction of a new Cooper Green Clinic. UAB leases the property for $1 a year and funds routine maintenance, repairs and utility service, while the county serves as the nominal employer of clinic staff, and remains liable for unbudgeted repairs and improvements, including environmental liability and remedial work. UAB reserves the first option on any sale of property. The agreement went into force on April 1, 2020.