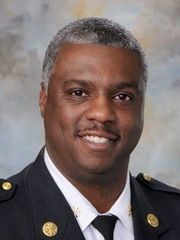 Cory Dewayne Moon (born February 24, 1979 in Birmingham) is the Chief of the Birmingham Fire and Rescue Service since February 3, 2020.

Moon grew up in Birmingham. He joined the department as a firefighter and emergency medical technician on March 26, 2001. He was promoted to lieutenant in 2012, to captain in 2015, and to battalion chief in 2017. Mayor Randall Woodfin appointed him as to succeed retiring interim chief John Whitmer in October 2019.