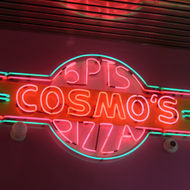 Cosmo's Pizza was a pizzeria and sandwich shop which operated from September 1986 to February 28, 2016 at 2012 Magnolia Avenue in Five Points South's Pickwick Plaza.

Cosmo's was founded by partners Stanley Shafferman and Billy Caldwell. Shafferman developed the "gourmet pizza" recipes, inspired by Wolfgang Puck's success with his Los Angeles restaurant "Spago". He introduced Birmingham to New York style thin-crust pizza, and to exotic toppings ranging from hearts of palm, pine nuts and roasted eggplant to alligator sausage and his own yellow pepper sauce.

All of the dough, sauces and desserts were made in house. The "House Special" was topped with pesto, prosciutto, sweet peppers, feta cheese, sun-dried tomatoes, and Italian sausage.

Shafferman left the partnership shortly afterward and Caldwell continued to operate it until he sold it to long-time employees Bill Deason and Leisa Bunn in 2000. They continued to expand the restaurant's offerings with house-made chocolate mousse and a popular brunch menu.

Changing tastes and competition from a flurry of new pizzerias in emerging entertainment districts cut into Cosmo's business. Deason and Bunn closed the restaurant at the end of February 2016 after months of declining sales.