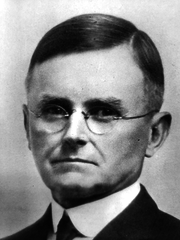 Dyer Findley Talley (born December 5, 1865 in Woodlawn; died January 8, 1947 in Birmingham) was a surgeon and president of the Medical Association of Alabama.

Talley was one of three sons born to Nicholas Davis and Mary Hawkins Talley. He attended local schools and earned his bachelor's degree at the University of Alabama in 1887 and attended medical school at Tulane University in New Orleans, Louisiana. He completed his training at the New York Polyclinic and Post-Graduate Hospital (now the Tisch Hospital) and spent some time in London, England.

Talley served as ambulance surgeon for New Orleans' Charity Hospital from 1890 to 1892, after which he returned to Birmingham to practice in partnership with G. C. Chapman. He opened Talley's Private Infirmary with W. P. McAdory, and also worked as an attending surgeon at Hillman Hospital and as an associate professor of the University of Alabama Graduate School of Medicine.

Talley served as a trustee of the Jefferson County Medical Library Association and as a member of the American Medical Association, the Southern Medical Society, and the Southern Surgical and Gynecological Society. For fifteen years he served on the Alabama State Board of Medical Examiners and Alabama State Board of Censors. He resigned those posts to accept the presidency of the Medical Association of the State of Alabama.

Talley was touring the clinics of Europe at the time that Archduke Franz Ferdinand was assassinated, and was present in Vienna, Austria at the time of his burial. He returned to the United States just as World War I broke out in Europe. On October 17, 1917 Talley married the former Elizabeth Fitzhugh Byrd.

Talley died in 1947 and is buried at Elmwood Cemetery.