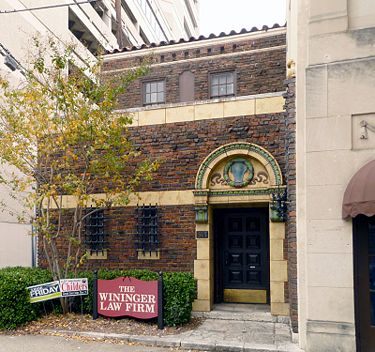 The D. O. Whilldin office is the former offices of D. O. Whilldin, architect. The two-story building, designed by Whilldin, was completed in 1924 at 517 21st Street North.

The office, set back behind a small planting area at the street, was faced with clinker brick. Whilldin incorporated colorful glazed terra-cotta details into the brickwork and added wrought-iron grilled and lanterns to the exterior. Mission style terra cotta tiles adorned a small sloped roof over the front facade, and in front of the recessed wall of the upper story.

The interior of the office featured a richly-ornamented consultation room with textured plaster walls, metal gates, wood beams, paneled built-in cabinets, wall sconces, recessed lighting and a fireplace. Another pair of doors opened into an interior courtyard. The long drafting room accommodated seven drawing tables and was lit by tall windows. The upper floor, accessible by a separate entrance and stair, was leased out.

To the right of the office itself, the structure incorporated an existing 1-story building, which was also leased out. Whilldin later added a second story to that wing, facing the front with smooth-finished limestone, contrasting in color and texture to the adjoining brick.

During design, Whilldin had considered increasing the height of the building to accommodate residential apartments. The foundations were designed for the possibility of a ten-story superstructure.

The D. O. Whilldin office and adjoining spaces later served as offices for the International Brotherhood of Electrical Workers. The then-vacant building was purchased in 1982 by a group of partners which came to include attorney David Wininger, who had long been interested in the property and has taken pains to preserve its architectural character.

Wininger soon bought out his partners, and the building has since housed his Wininger Law Firm. Other recent tenants have included the firm of Gaines & Davis. In 2012 Wininger commissioned Stephen Smith to paint a large mural depicting New York's old Yankee Stadium with several famous former Yankee players on the south wall of the building.