From Bhamwiki
(Redirected from Dale's Hideaway)
Jump to: navigation, search 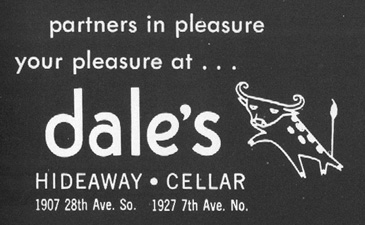 Dale's Cellar was a chain of steakhouses that was founded by Jake Levine Jr in downtown Birmingham in 1946. Levine had served in Hawaii during World War II and brought back a recipe he had developed for a soy and ginger-based steak marinade.

The first restaurant location was located in the basement of an apartment building at 1927 7th Avenue North (Park Place). Head chef Clyde Adams grilled steaks in an exposed kitchen, visible behind glass.

A second Birmingham-area location, called Dale's Hideaway, opened by 1958 at 1907 28th Avenue South in Homewood. That location boasted of its "smoke cooked" meats and also offered pizzas and hamburgers.

In 1963 Dale's Cellar opened its first "above ground" location in Panama City Beach, Florida. Many of the restaurant's seafood dishes were developed there. Ultimately the chain grew to nine locations including Montgomery, Huntsville, Florence, Nashville, Atlanta and Charlotte.

After Jake Levine's death in 1966 his widow, Estelle took over the business. She brought in manager Murray Woltag to oversee production of the restaurant's signature marinade.

In 1975 the downtown Dale's Cellar moved to the Essex House at 21st Street and 6th Avenue North.

By 2009 only the Florence location was still operating as a restaurant. The signature marinade, however, is still produced and sold as Dale's Seasoning in grocery stores.