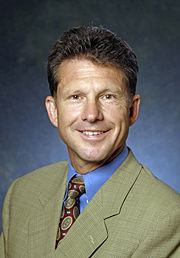 Dale J. Benos (born September 1950 in Cleveland, Ohio; died October 7, 2010 in Birmingham) was chair of the UAB Department of Physiology and Biophysics from 1996 until his death.

Dale was the son of John and Corrinne Benos, a railroad worker and a beautician in Cleveland. He graduated from St Ignatius Catholic High School and earned his bachelor's degree in biology in 1972 at Case Western Reserve University, where he was inspired by the research being done by Bodil Schmidt‑Nielsen. She invited him to work with her at the Mount Desert Island Biological Laboratories in Maine after his senior year. Rather than pursue medical school, he followed her advice to pursue research in physiology. He studied under Daniel Tosteson at Duke University and completed his Ph.D in physiology and pharmacology there in 1976. He served a two-year post-doctoral fellowship under Lazaro Mandel at Duke, then completed another fellowship at Harvard University, where he also served as an assistant and associate professor.

Benos came to UAB in 1985 as an associate professor. He was made a full professor two years later, and chair of the department after 9 more years. He was given the UAB President's Award for Excellence in Teaching in 2006. In 2007 he was named the "Distinguished Faculty Lecturer" for the School of Medicine. In 2008 he was honored as the inaugural University of Alabama Health Services Foundation Endowed Chair in Biomedical Research. He also held professorships in Cell Biology and Neurobiology.

Benos' research, funded since 1976 by the National Institutes of Health, was focused on the study of sodium ion movement in healthy and tumorous cell membranes. He published over 200 scientific articles and 80 invited reviews. He served as a senior scientist in the Gregory Fleming James Cystic Fibrosis Research Center, the Nephrology Research and Training Center, the UAB Center for AIDS Research, the UAB Comprehensive Cancer Center, the Arthritis and Musculoskeletal Center, the Center for Computational and Structural Biology, the Center for Biophysical Sciences, and the Engineering and Vision Science Research Center.

Benos edited four books, and was editor of the journal SHOCK. He served on the editorial boards of several other journals, as well. In 2006-07 Benos served as president of the American Physiological Society.

Benos died suddenly of natural causes in 2010. He was survived by his wife, Kim, and two daughters, Kaitie and Emilee. He was an active member of the Church of the Highlands.