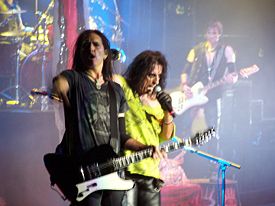 Johnson grew up in Monroeville, where he first picked up guitar in middle school. Exposed to country music at home, he became obsessed with the guitar after discovering Lynyrd Skynyrd and Kiss. He formed a garage band with some of his classmates called "Renegade". In 1979 the family moved to his mother's home town of Geraldine in DeKalb County. There he met Larry Davis, Danny Beason, Jeff Maddux and Jamie Collins and formed a band called "Silver Rose" which won the Geraldine High School talent show. A trip to Birmingham to see Van Halen play the BJCC made a deep impact. While attending electrical engineering courses in college, Johnson joined "Headline", Pat Upton's house band at P. J.'s Alley in Guntersville.

In 1987 Split the Dark's Marc Phillips sat in with Headline during a show at Louie Louie. A few weeks later, Philips asked Johnson to join Split the Dark, replacing the departed Scott Macdavid. He moved to Birmingham and recorded a few tracks with them before the band broke up in 1988. Johnson and Split the Dark bassist Eddie Usher joined the Atlanta-based band "Witness" later that year. 1989 saw Johnson with the Memphis-based Delta Rebels and another band called "Chinatown" with Eric Dover.

Johnson's next project was the four-piece rock band Chyld, which got its start in 1990. After working with different lead singers and acquiring a development deal with Virgin Records in November of that year, a record company representative heard Johnson sing a few cover songs and became convinced that Damon should become the lead vocalist and frontman. After changing their name to Brother Cane, the group began recording at Record Plant Studios in Los Angeles during the summer of 1992.

Brother Cane went on to record three albums for Virgin, each of which produced a #1 single on the rock charts: "Got No Shame", "Fools Shine On", and "I Lie in the Bed I Make", respectfully. "Fools Shine On" was also chosen as the theme song for the 1995 movie "Halloween: The Curse of Michael Myers". After six years of recording and touring, Brother Cane amicably disbanded at the end of 1998.

In December 2002 Johnson's next band, Red Halo debuted at The Nick, featuring three former members of Virgo's Merlot. Johnson sang lead vocals and played bass with the group, which recorded in Johnson's basement in Alabaster, which he dubbed Double Dragon Studios. In October 2003 Johnson stepped aside to focus on producing, introducing Mark Fain as the new front man for the group. Johnson produced recordings for several other groups in his home studio over the next several months.

Johnson took over guitar duties during Alice Cooper's "Eyes of Alice Cooper" tour when fellow Birmingham guitarist Eric Dover had to leave the group in August 2004. Cooper’s album, Dirty Diamonds, features Johnson’s playing and songwriting skills and he continues to tour with the band. On March 10, 2005 Johnson rejoined the other original members of Brother Cane for a reunion show as part of Phillips Fest, a benefit for Marc Phillips at the Alabama Theatre.

Meanwhile, Slave to the System inked a two-album deal with Spitfire/Eagle Rock Records in July 2005. Johnson performed as a member of the three-piece bar band The Welfare as well before joining up with Whiskey Falls for their 2007 debut single "Last Train Running". The new band, which performed at the 2007 City Stages, has a recording contract with Nashville's Midas Records.

Johnson was hired to play with Thin Lizzy, and began writing new songs with the band's members. Out of respect for Thin Lizzy's primary songwriter Phil Lynott, the new material was recorded and released with a new band name, Black Star Riders. BSR and Thin Lizzy have toured together throughout 2012, 2013 and 2014.

Johnson, previously of Alabaster, lives in Nashville with his wife and five children.