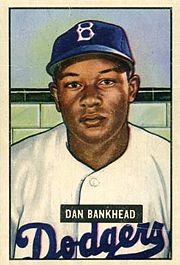 Daniel Robert Bankhead (born May 3, 1920 in Empire; died May 2, 1976 in Houston, Texas) was the first black pitcher in Major League Baseball.

Bankhead was one of seven children born to Garnett and Arie Armstrong Bankhead. His father was a laborer and miner who had played organized baseball in the Cotton Belt League. His brothers, Sam, Joe, Fred, and Garnett Jr all played baseball, too.

Bankhead attended public schools until he won a contract with the 1940 Birmingham Black Barons. He and played for parts of the next three Black Barons seasons, spending the winters in the Mexican League. On July 27, 1941 he pitched two scoreless innings of the East-West All-Star Game. On April 22, 1943 he enlisted with the Marine Corps and was stationed with the Montford Point Marines at Camp Lejeune, North Carolina. He was given leave to pitch in at least one Black Barons game during his service, pitching a three-hit shutout with 17 strikeouts against the New York Black Yankees in the second game of a June 5, 1944 double header at Yankee Stadium.

Bankhead was discharged on June 7, 1946 and reported to the Memphis Red Sox in 1946. He married white jazz singer Linda Marquette. He pitched and batted well for two seasons, leading the Negro American League with a .385 batting average, before being noticed by the Dodgers, who needed pitching help. After having dinner with the Bankheads, Dodgers owner Branch Rickey offered Memphis $15,000 for Bankhead's contract.

Bankhead made his debut relieving Hal Gregg in the second inning of an August 26, 1947 game against the Pittsburgh Pirates at Ebbets Field. His first pitch veered inside and struck outfielder Wally Westlake in the arm and he ended up allowing 8 runs on 10 hits in his 3⅔ innings. He did, however, hit a home run off of Fritz Ostermueller in his first Major League at-bat. After the game he told writer Sam Lacy, "...I’ll be okay as soon as this newness wears off. Today it seemed like I was wearing a new glove, new shoes, new hat, everything seemed tight." He only got two more appearances on the mound for an ERA of 7.20, but remained on the active roster right through the World Series, in which he scored in his only appearance, late in game six as a pinch runner.

After Spring training in the Dominican Republic, Bankhead was shipped to the minor leagues for the 1948 and 1949 seasons. He was first sent to Class B Nashua, New Hampshire where he threw a 7-inning no-hitter on the way to a 20-6 record with 243 strikeouts before being promoted to the AAA St Paul, Minnesota Saints, where he finished the year 4-0 with a 3.60 ERA. For 1949 Bankhead was sent to pitch for the AAA Montreal Royals where he compiled a 20-6 record, leading the International League in both strikeouts and walks. He also batted .323 and drove in 26 runs for the champion Royals.

He returned to the Dodgers for the 1950 season and recorded 9 wins and 4 losses with a 5.50 earned run average. Highlights included a complete game against the Cubs on May 24 and a six hit shutout of the Cardinals on June 18. Just as he was settling into the rotation, however, shoulder and arm problems began mounting. After July he was used more frequently out of the bullpen. In 1951 he only pitched 14 innings for the Dodgers with a 15.43 ERA. Rickey sold his contract to Montreal on July 24.

In 1951, his final year in the league, he appeared in only 7 games and recorded a record of 0 wins and 1 loss with an earned run average of 15.43. Bankhead completed his Major League pitching career with a 9-5 record in 52 games with 111 strikeouts and a 6.52 ERA. Afterward he extended his career in the Mexican League, eventually managing teams in Leon, Reynoso and Aguascalientes until his retirement in 1967.

Bankhread died of cancer at a Veterans Administration hospital in Houston. He is buried at the Houston National Cemetery.