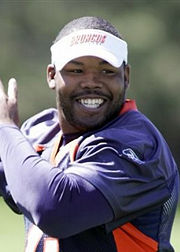 Darrell Hackney (born August 7, 1983 in Atlanta, Georgia) is a free agent quarterback. He played college football for the UAB Blazers and has appeared professionally with the Cleveland Browns and Denver Broncos of the National Football League.

Attending college at the University of Alabama at Birmingham, he was redshirted in 2001 as a true freshman. Hackney currently holds several of the career UAB passing records, including passing yards (9,886 yards), touchdowns (71 touchdowns), completions (694 completions) and most total offense per game (243.4 yards per game). He also holds several single-season records for the Blazers.

Hackney was not drafted and was subsequently signed as a free agent with the Cleveland Browns. The Browns cut him on September 2, 2006. On January 2, 2007, he signed with the Denver Broncos. Hackney spent the training camp with the Broncos where he competed with Jay Cutler, Preston Parsons, and Patrick Ramsey for the starting quarterback position. Even though Hackney was not thought to be the right size for QB he played well in scrimmages and the preseason. At the end of the training camp, Hackney was signed to the training squad. Hackney had 2 chances in the pre-season to help the Broncos to a win. One game he was named the starter, but then he was replaced by Cutler; he stepped in to help Cutler out in the final minutes of another game. At the end of the 2007 pre-season, he was assigned to the Bronco's practice team; Cutler was named the starting quarterback. On November 10, Hackney was assigned to the on-field team after Cutler was injured.

In 2008 Hackney was signed to the Broncos practice squad, but promoted to the active roster on November 1 after Patrick Ramsey was placed in injured reserve. He was waved on April 6, 2009 when the Broncos signed Kyle Orton. He played briefly for the Winnipeg Blue Bombers of the Canadian Football League and signed with the United Football League's Florida Tuskers in 2009, but was released before the season began.