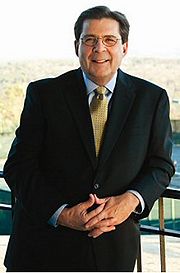 Carrington earned his bachelor's in mathematics with a minor in economics (1970) and master's in business administration (1975) at the University of Houston and went to work in the merchandising department of Parisian department store in 1978. In 1983 he left to found WDC Systems, an inventory management and retail software provider. He purchased the Riverchase Galleria's That's Racin store in 1997 and transformed it into Racing USA, an independent retailer of NASCAR-related items. While undergoing cancer treatment in 1999, he decided to open a web-based store, RacingUSA.com, now the world's largest independently-owned retailer of NASCAR merchandise. Following the success of the online business, he closed his brick and mortar stores in Birmingham, as well as Huntsville, Trussville and Boaz. Carrington was honored as an Alabama Retailer of the Year in 2005.

Carrington was elected president of the Jefferson County Commission after taking office. One of his first acts was to re-organize the committee assignments of commissioners, making the position of president less powerful than it had been when the president controlled the finance and general services committees.

Carrington announced his candidacy for Governor of Alabama in early 2017. He dropped out of the race on September 13. Carrington did not run for a third term on the Commission in 2018. Steve Ammons was elected to his former seat. In retirement, Carrington plans to write a book about the county's emergence from bankruptcy and to seek consulting jobs based on his experience with governments in financial crisis. He also serves on the advisory board for the Birmingham Iron football team.

Carrington is married to Sonia Carrington, former principal of Rocky Ridge Elementary School. They have two sons and four grandchildren and are members of Shades Mountain Baptist Church.