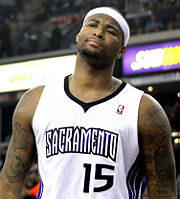 DeMarcus Cousins (born August 13, 1990 in Mobile) is a center for the Sacremento Kings of the National Basketball Association. As a senior at LeFlore Magnet High School, he averaged 26 points and 12 rebounds per game. He led the Rattlers to the 2008 AHSAA Final 48 basketball championships, where they lost to Tuscaloosa's Hillcrest High School 63-59 in the semifinal. As a senior he was named to the McDonald's and Jordan Brand All-American teams and was ranked as high as #2 nationally among prep basketball prospects.

During the tournament, Cousins announced his intention to sign with the UAB Blazers. His insistence that his letter include a provision allowing him to transfer if Mike Davis left the school was not honored, and he instead committed to play for John Calipari at the University of Memphis. When Calipari left to take the head job at the University of Kentucky, Cousins followed him there, signing his letter of intent on April 15, 2008.

At Kentucky, Cousins averaged 15.1 points, 9.8 rebounds and 1.8 blocks per game. Cousins led the Southeastern Conference in rebounding and was named SEC Freshman of the Year. He and fellow freshman teammates John Wall and Eric Bledsoe helped the Wildcats reach the Elite Eight in the 2010 NCAA Tournament.

On April 7, 2010 Cousins announced his intention to forego the rest of his college eligibility and enter the NBA draft. The Sacremento Kings selected him with the fifth overall pick. He signed a 2-year $7 million contract on July 7 and was named "NBA Rookie of the Month" that same month. Team owners George and Gavin Maloof draped a 10-story banner of Cousins' likeness over a downtown building and another outside the Arco Arena to promote the team's young star.