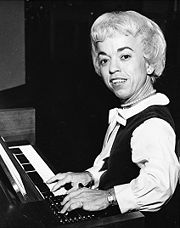 Adele Chambordon (born 1921; died December 8, 2012) was a bookkeeper at Loveman's department store, known to generations of children as "Twinkles the Elf" for her public appearances at the store during the Christmas shopping season.

Adele was the daughter of Paul Lawrence and Catherine Fadely Chambordon. She was born with a type of dwarfism and reached a mature height of 4 feet 3 inches. She grew up in East Lake and was a cheerleader at Woodlawn High School. where she was voted "most popular" and "friendliest girl" for the class of 1940. She began working at Loveman's in 1942. When the downtown store closed in 1980 she moved to Pizitz for six more years before retiring.

In the 1950s and 1960s, Del participated as Santa's helper in Loveman's "Breakfast with Santa" promotion. She dressed as an elf and played the accordion while greeting children at Loveman's tea room. Always happy to be the center of attention, she also dressed up as the Easter Bunny and as a cowgirl for various events. She was also skilled at piano, organ and tap-dance. Her bright smile and sparkling personality made here a favorite with the public. She spent time with Lawrence Welk during a "Little People of America" convention, which she attended with help from her coworkers.

Chambordon spent her later years at St Martin's in the Pines. She died in 2012 and is buried at Forest Hill Cemetery.