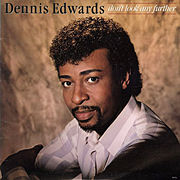 Edwards was a member of The Contours during the late-1960s, but was recruited by Norman Whiteside to replace David Ruffin as lead singer of The Temptations in 1968. Edwards led the group for nine years through its psychedelic, funk, and disco periods until he was fired by Otis Williams in 1977 just before they left Motown for Atlantic.

When the latter was first presented to the group, Edwards was angered by first verse "It was the 3rd of September/That day I'll always remember/'cause that was the day/that my daddy died", because his father had actually died on that date. He accused songwriters Norman Whitfield and Barrett Strong of deliberately assigning him the verse. The song was first recorded earlier that year by fellow Motown group The Undisputed Truth. Though Whitfield and Strong denied the lyric assignment was intentional, they did take advantage of Edwards' anger to get a more bitter, rumbling sound from the usually flashy singer.

After the group left him behind, Edwards made a unpromising start as a solo artist. He refused to rejoin the group when the Temptations returned to Motown in 1980, but did sing alongside Ruffin and Eddie Kendricks on the Reunion album and tour in 1982. When tension over missed shows and rehearsals flared up in 1984 he was replaced again, this time by Ali-Ollie Woodson.

Edwards had a hit with the 1984 single "Don't Look Any Further", a duet with Siedah Garrett. He got another chance with the Temptations when Woodson left the group in 1987, but again lasted only two years before Williams fired him again (rehiring Woodson).

Edwards toured and recorded with fellow ex-Temptations David Ruffin and Eddie Kendricks during the late-1980s as "Ruffin/Kendrick/Edwards, Former Leads of The Temptations". After the deaths of both Ruffin and Kendrick, Edwards was forced to wrap up the project alone. During the 1990s, Edwards began touring with his own group under the name "Dennis Edwards & the Temptations", prompting a legal challenge from Otis Williams. It was eventually agreed that Edwards' could use the name "The Temptations Review featuring Dennis Edwards". That group, based in St Louis, Missouri, continued to perform