From Bhamwiki
(Redirected from Discovery 2000)
Jump to: navigation, search 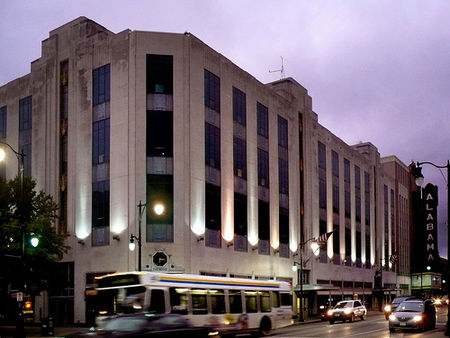 The McWane Science Center is a non-profit hands-on science museum and research archive located at 200 19th Street North in downtown Birmingham. It first opened in 1998 after extensive renovations of the former Loveman's department store and the construction of an adjacent 280-seat IMAX Dome theater.

The center reported 428,820 visitors in 2008, making it the fourth-most popular admission-charging attraction in the state. The CEO of McWane Science Center is Amy Templeton.

The McWane Science Center is named after the McWane family and McWane, Inc. both of which helped fund the center. It was the end result of a project begun shortly after the merging of the Red Mountain Museum and Discovery Place children's museum in 1991. The combined board began fund raising for a new museum with the working title of Discovery 2000. The site of the existing Red Mountain Museum was considered, but the difficulty of accommodating school buses and the city's reticence about upgrading the road cut walkway for handicapped accessibility made it clear that moving was the only option. With major funding from the owners of McWane, Inc., the McWane Center took its present form.

In addition to the 280-seat IMAX Dome theater, used for feature presentations, there is a Rushton Science Theater for live multimedia presentations, wet labs for classroom-style teaching, and several smaller seating areas for demonstrations.

The "Alabama Collections Center" is the home for more than 500,000 artifacts from the former Red Mountain Museum. The center houses precious minerals, fossils and Native American artifacts. Highlights in the collection include the world's fourth-largest collection of mosasaurs; the Appalachiosaurus (the Alabama Tyrannosaurus); and the state fossil of Alabama, the Basilosaurus (an 80 foot fossil whale).

In February 2011, a giant octopus was added to a 1,000 gallon Ocean Journey tank as part of a renovation to the World of Water exhibit which is housed in on the lower level of the building.

Birmingham Children's Museum Itty Bitty Magic City, a 9,300-square-foot space designed for toddlers and preschoolers, opened on May 16, 2015. The area is composed of Main Street featuring a fire station, a farm, a veterinarian clinic, a market, a diner and a garage; Tot Spot; water play; and a climbing structure. There are also two classrooms for educational presentations. The space took five years of planning and 14 months to construct.