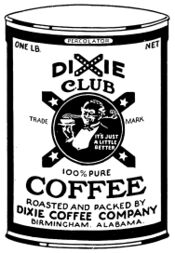 The Dixie Coffee Co. was a wholesale coffee distributor located at 2021–2023 and 2024 Morris Avenue from the 1920s to the 1960s. In addition to its Dixie Club Coffee and instant coffee brands, the firm distributed teas.

It was founded by Greek immigrant Gus Jebeles in 1921, but he sold the business in 1925 to Robert and Arthur Schneider in order to re-open the Reliance Hotel near the Birmingham Terminal Station.

The firm was re-incorporated as Dixie Club Coffee Inc. in 1957. The company was dissolved in 1962.