Do Dah Day is an annual pet parade, music festival and fund-raiser that is held on Highland Avenue and in Caldwell and Rhodes Parks. The first Do Dah Day was conceived at a meeting of friends at Dugan's to fill a need for a Spring festival. The first parade, in 1979, had around 35 participants, including Ed Boutwell and John McGibboney. Proceeds were donated to the Birmingham Zoo's Monkey Island.

Since McGibboney became president of the Greater Birmingham Humane Society in 1980, it and other pet rescue and welfare organizations have been the beneficiary of over $900,000 raised. When Boutwell relocated to West Texas in 1987 his daughter, Nancy Boutwell, served on the organizing committee in his absence. That year they invited Jessica Hahn, still in the spotlight of her imbroglio with televangelist Jim Bakker, to serve as the parade's grand marshall, earning a great deal of media attention.

In the following years the festival became more organized and respectful of authority. Larry "Bud" Melman was grand marshall in 1992. Morris Day and the Time was a featured performer. Adam Ant provided a forgettable set of pre-recorded hits. The one-day parade and festival is still organized and operated entirely by volunteers. Numerous animal groups, political candidates and other organizations make use of the event to solicit interest and disseminate information.

Do Dah Day is presented by its 32-member Board of Directors. The board president is Audrey McClinton, who succeeded Richard Thornton.

A group of friends including Ed Boutwell, John McGibboney, Ann Staub, and Betsy Hardigree, applied for a parade permit to jump start the summer party season.

The baton of organization was passed to a new group who expanded the festival, cemented its legality, and formally invited pets to be the centerpiece of the parade.

Jessica Hahn appeared as grand master of the festival, generating a great deal of attention.

Approximately 12,000 attended the festival which grossed $60,000, donating 2/3 of that amount to animal shelters.

A successful festival drew 40,000 in attendance and makes a $49,000 donation to the Humane Society.

The 20th Anniversary Do Dah Day was held on May 22. Proceeds went toward establishing a spay/neuter program with the help of local veterinarians.

The May 1 event featured the Subdudes.

Lousy weather put a mild damper on the festival, which moved to Rhodes and Rushton Parks while Caldwell was being rehabilitated.

Approximately 40,000 attended the 27th Do Dah Day in glorious warm weather on May 20. Mike White and Elizabeth Russell were named King and Queen at Do Dah Eve at Zydeco. Elvis, a 6 year old Labrador retriever, was named the pet king of Do Dah Day. Harry the Hairless, a Mexican hairless, was crowned "Ugliest Dog".

The 28th annual festival was held on May 19. Matt Lackey and Christie Lynam were named King and Queen at Do Dah Eve at Nana Funks. Chinese hairless "Cooper" dethroned Harry the Hairless for the title of "Ugliest Dog" 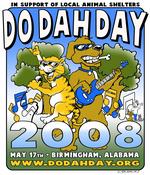 The 29th Do Dah Day was held on May 17. Music acts included the Ryan Kinder Band, Jeremiah Meyer Band, the Barnstormers, Act of Congress, Anders Osborne, Jon Vogel & the Southside Community Band, the Shame Idols, The Strife Rifle, Halo Stereo, The Last Straw, and the Radiators. The 2008 t-shirt and poster art was done by Joe Attaway and included a caricature of former Do Day Day president Jerry Yarley.

The 30th Do Dah Day was held on May 16. Jessica Bush was queen. Blue, a Great Dane, was pet king.

The 31st Do Dah Day, celebrating "Cool Cats and Hot Dogs," was held May 15. Bessie, a mixed breed owned by Leisa Bunn of Cosmo's Pizza was named Queen. Bessie lost a leg in 2009 after she was shot by Birmingham Police responding to a stray dog call. Oscar Dodd, a ferret owned by Julie and Rodney Dodd escorted her as King. Dog and cat hair was collected to make booms to protect wetlands and marine habitat on Alabama's Gulf Coast.

The 32nd Do Dah Day was held May 21. Skillet the Dog and Puggy Sue Dodd were named king and queen. Donations were taken to assist animals orphaned as a result of the 2011 tornado outbreak, and proceeds from to event went to Greater Birmingham Humane Society and Friends of Cats and Dogs.

PetSmart and Banfield returned as presenting sponsors for the May 17, 2014 Do Dah Day. Do Dah Eve was held at Black Market Bar & Grill.