From Bhamwiki
(Redirected from Domed stadium)
Jump to: navigation, search 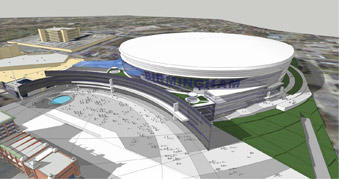 2010 rendering of the domed stadium by Populous

The 2007 domed stadium proposal was a proposed 70,000-seat multi-purpose facility to have been constructed on 4 blocks of land immediately east of the Birmingham-Jefferson Convention Complex. Funding for design and pre-construction was approved by the Birmingham City Council in July 2009 at the urging of Mayor Larry Langford. No funding for major construction of the projected $375 million project was approved.

The open-air Protective Stadium was eventually built on the property and opened in 2021.

While not a new topic, the idea of a domed stadium was a hot topic during the 2007 Birmingham mayoral election. All nine candidates expressed some support for building a dome, or at least for putting it to another referendum after the 2006 elections, in which suburban voters put a new Republican majority on the Jefferson County Commission which promised greater fiscal responsibility and specifically rejected the notion of lending their support to a domed stadium.

. As Langford's status as a front-runner emerged, he promised to make building a dome a priority for his administration and that he would propose a way to pay for it without help from the state or county within his first 30 days in office.

Once he was sworn-in, Langford needed only a few days to prepare a 1-page summary of a plan to pay for a domed stadium and other projects. His Birmingham Economic and Community Revitalization Ordinance (BECRO) called for a 1-cent increase in local sales tax and a doubling of business license fees. The revenue from increases in business licenses would provide, according to the proposal, enough to fund a $500 million bond issue for a "Dome Stadium". The City Council approved the funding measures on December 4, 2007.

More details about the Langford's proposal for the dome were released in late November. A compromise was reached on the size of the stadium with a $434 million, 57,500-seat stadium planned, expandable to 65,000. The facility would provide 160,000 square feet of floor space for trade shows or conventions, and would be designed to accommodate basketball and concerts at less-than-full capacity.

Though he said in an Operation New Birmingham meeting that the BJCC expansion site was the only feasible location for the dome, Langford mentioned only Fair Park and John Rogers Drive as potential sites in a December 5, 2007 interview on WBRC 6. In later interviews he expressed his view that, despite "drawings and schematics" indicating otherwise, that the downtown site was too small and that only the John Rogers Drive site was large enough for the project.

That announcement sparked criticism, fueled in part by the fact that Birmingham Race Course owner Milton McGregor, whose Jefferson County Racing Association owns the property, was a big contributor to both Langford's and Carole Smitherman's mayoral campaigns. Langford lashed out at his detractors, dismissing them as "haters" who didn't want to see Birmingham make progress, but he did agree to seek and follow the recommendation of an independent site evaluation, which would be commissioned by a business group unaffiliated with his administration or with the BJCC authority.

In March, Birmingham Business Leadership Group created a panel to commission a study of three potential sites: the site adjacent to the BJCC, the Legion Field site, and the John Rogers Drive site. The panel consisted of business leaders John Johns, CEO of Protective Life, co-chairman of the sub group, along with Alagasco President Dudley Reynolds. Also on the panel were J. Mason Davis, Jr, a partner with law firm Sirote & Permutt; Ann Florie, executive director of Leadership Birmingham; Don Logan, an owner of the Birmingham Barons and CEO of Time Warner Cable; and Reynolds Thompson, CEO of Colonial Properties Trust. Langford asked the panel to evaluate the proposed sites as if the dome were their own company's project. In June the panel hired Atlanta-based Heery International and Texas-based Conventions, Sports & Leisure International to perform the study. Their report, delivered on August 29, favored the downtown site.

Meanwhile, Jefferson County's debt crisis and possible bankruptcy has affected the willingness of bond insurers to do business with Alabama governments, meaning that the proposed bond issue is likely to be more expensive, and perhaps prohibitive. At the same time year-to-year construction cost increases may threaten the project's finances.

In May 2008 the BJCC board approved a plan to interview potential architects for the project. Out-of-state bidders would be required to associate with a local firm. In June the BJCC board reported that it had received inquiries from at least eight firms, including one from Australia, two from Atlanta, and three from Kansas City. A panel made up of Langford, Bettye Fine Collins and representatives of the Greater Birmingham Convention and Visitors Bureau and the business community narrowed the list to two finalists (HOK Sport of Kansas City, Missouri and HKS, Inc. of Dallas, Texas) in December 2008. On December 17 the board unanimously selected HOK to proceed with designs based on their renderings of a 57,500-seat arena.

In July 2009 the Birmingham City Council voted 7-1 to approve Langford's proposal to contribute $8 million per year to the BJCC board to help pay for design and engineering work, budgeted at $20 million. With the funding approved, the board entered into a contract with Populous (the new name for HOK Sport) to assemble local partners and complete the design and construction documents. Langford presided over a ceremonial groundbreaking on July 21, 2009 at which he suggested that the arena floor be named for John Rogers.

During August representatives from Populous interviewed local architecture firms and possible consultants and contractors. They planned to exceed 50% local participation on the design team and 30% minority involvement in the overall project. The BJCC planned to begin actual construction in the summer of 2010 with hopes of completing the project in time for a mid-2013 opening.

Saber Engineering and Schoel Engineering were hired in September 2009 to complete topographic surveys and drainage plans of the site while Bhate's geosciences division was hired for geotechnical studies. In the summer of 2010 Populous presented renderings of a 70,000-seat stadium with a projected cost of $375 million. By then, some BJCC officials were resigned to the fact that insufficient revenues were available to the project. Board vice-chairman E. C. Brown told the Birmingham Business Journal that "the money is not there. (The project) is dead, D-E-A-D, dead." (Piper-2010)