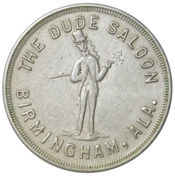 The Dude Saloon and Restaurant was owned by John B. Webb and located in his 3-story Webb Building on the southwest corner of 20th Street and 2nd Avenue North from 1871 to 1907. The well-furnished bar was located on the ground floor with rooms for boarding guests upstairs.

In 1875 "Webb's Old Stand" was being operated by J. W. Dupuy. He took delivery of two new billiard tables for the saloon that year. In January 1887 it was reported that Webb was closing the saloon and opening a "family" grocery.

In 1884 the restaurant was managed by Emil Lesser, while the saloon's proprietor was Joe Hochstadter. In 1887 the Dude Saloon offered "regular meals" for 25 cents. On July 16, 1891 Deputy U.S. Marshal Eugene Byars encountered a personal enemy, former police officer Gus Garner, at the Dude Saloon and initiated a fistfight that resulted in their arrest. On April 27, 1894 W. L. McCormack, a delegate to the 1894 Reunion of United Confederate Veterans from Cedartown, Georgia, fell out of a third story window and died from his injuries.

Like other saloons of the era, the Dude Saloon issued tokens to customers which could be exchanged for drinks. These tokens are valued by collectors today. In 1901 the Leisure Hours Reading Club, suspected by police chief C. W. Austin of being a gambling den, was located upstairs from the saloon.

New police chief William Weir made his first raid of the gambling rooms above the Dude Saloon on June 6, 1903. He made more than 50 arrests and sized dice and card tables and other paraphernalia. He noted that most of those arrested were under the age of 25, and many gave false names when booked. In August 1903 Weir's forces returned to the same rooms, arresting 30 men and confiscating more than $500 in cash, two dozen pairs of dice, a roulette table and 2,000 chips. Another raid, in September 1904, netted the arrest of accused gaming table proprietor H. M. Morse.

During 1904 the saloon operator was M. L. Satterfield. In November 1905 the saloon was the site of another violent encounter when a former police officer, Walter Bennett killed a railroad worker, E. L. Owen, at the bar.

The saloon was forced out of business by the passage of local prohibition across Jefferson County in 1907. At the time, the Dude was reportedly paying $500 a month in rent, plus $1,000 per year for its city license.

There was another Dude Saloon in Pratt City, with Will Swain as bartender in 1900.