From Bhamwiki
(Redirected from Earle Hotel)
Jump to: navigation, search 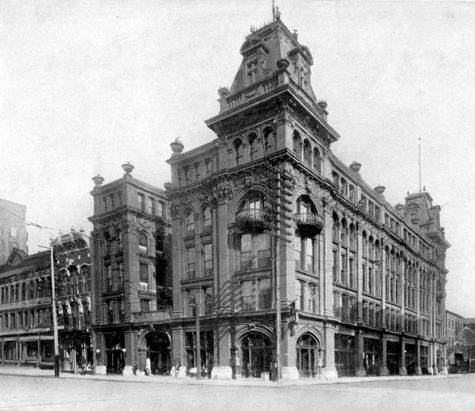 The Morris Hotel (originally the Morris Block) was an office building and 125-room luxury hotel which opened in 1891 on a 105 by 185-foot lot on the corner of 19th Street and 1st Avenue North.

The building was originally planned by financier Josiah Morris as an office block when he purchased the property in 1886. After reviewing proposals from six architects, he hired Paris-born Edouard Sidel to design the heavily-ornamented French Renaissance (or "Second Empire")-style six-story structure. Construction began in 1888, but saturated soil complicated the foundation work, necessitating a shipment of Vermont granite to continue. The building was considered an architectural marvel, with corner towers crowned with a tall mansard roof and semi-circular balconies projecting over the sidewalk. A recessed light court was entered through a large archway on the 1st Avenue side. A 2,000-piece Belgian-made stained glass skylight covered the colorfully-tiled atrium beyond.

The Birmingham Trust & Savings Company used the Morris Block as its headquarters office for ten years. It was also the location of the first offices of the Engel Realty Company. Other businesses included the Morris Tavern, Morris Jewelers and Woodward Billiard Parlor. The Southern Association was organized in the Morris Block in 1901.

After the destruction of the Caldwell Hotel in 1894 the upper floors of the Morris were converted for use as hotel rooms. Soon afterward dining room manager C. H. Nabb leased the entire structure to be operated as a luxury hotel. Its 2,185 square-foot "El Dorado" dining room, furnished with crystal chandeliers, ceiling fans and wood paneling, became known as the city's most fashionable restaurant. Contemporaries described it as "A Scene from Fairyland; a vision of loveliness, a palace of enchantment." The room featured custom-embroidered linens, monogrammed china-ware and engraved crystal all bearing the imprint of "The Morris". 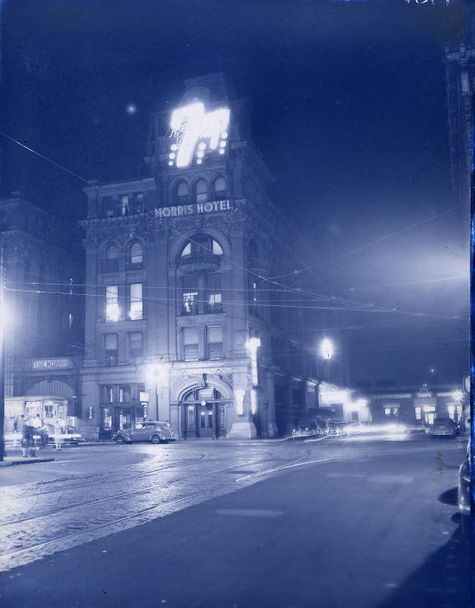 The Morris, October 1947. Photo by Charles A. Preston.

Notable guests of the Morris included Admiral Winfield Scott Schley, a hero of the Spanish-American War and stage stars such as Joseph Jefferson, Robert Downing, Louis James, Maude Adams and Robert Edeson. Senators John Morgan and Oscar Underwood also used the Morris Hotel as local campaign headquarters. Erskine Ramsay resided at the hotel while he was employed by the Tennessee Coal, Iron and Railroad Company. In May 1903 Elias Lathem was killed inside the hotel. William Wise and Glen Havis were charged with his murder.

The hotel was operated by Michael and Annie Clifford before 1908 (when they were sued in municipal court by John Henley for assault and battery). In 1910 the hotel advertised rooms on the "European plan" for $1.50 and $3.00. In 1938 Frank Beihl operated the New Morris Hotel Tavern from the ground floor.

The business was sold to the Penney family in the 1920s. On November 14, 1943 a fire broke out in the Morris. It killed two people and caused heavy damage to the fourth and fifth floors. It later reopened as the Earle Hotel, but resumed using the Morris name before 1948, under the management of Opal Felkins.

In 1957 Paul Penney (along with former Morris Block tenants Birmingham Trust National Bank and Engel Realty Company) negotiated a ground lease for the hotel site to Allright Parking System founder Durell Carothers of Houston, Texas. He planned to build a four-story parking garage with ground-floor offices on the site. The former hotel was demolished in 1958. The parking deck that was eventually built was only three levels.