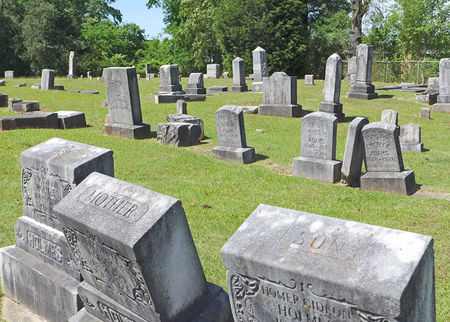 View of East Lake Cemetery in May 2020

East Lake Cemetery, also called Ruhama Cemetery, is a two-acre cemetery located on Division Hill, along 78th Street, straddling Division Avenue, in Birmingham's East Lake neighborhood. It was established in 1836, long before the establishment of "East Lake" as a streetcar suburb of Birmingham, and was associated with Ruhama Baptist Church. The first parcel was donated to the church by Richard Wood and his wife, Harriet Bradford Wood.

In 1884, Jemison Realty donated several additional lots to the cemetery before it went to a stock company, where shares were bought by several people and interests, including the Jemison Company and Ruhama Baptist Church. The reorganization, formally transacted on July 19, 1890 marked the beginning of a period of much greater utilization of the cemetery.

The shares were eventually sold in 1900 to William Williams, but no endowment was preserved. An East Lake Cemetery Improvement Association organized to preserve and manage the cemetery. That group commissioned a "wall committee" to make plans to enclose the property in 1918. After Williams' death in 1931 the cemetery became the property of Curtis Shugart. Later it was owned by long-time sexton John Lavender, who died in 1949. Olin Kelso succeeded him.

In April 1955 the cause of preserving and beautifying East Lake Cemetery was undertaken by a newly-formed Division Hill Memorial Garden Club. The organizers of the club included Kelso, Robert Galbreath, G. A. Waters, and Mrs Leon Palmer and the group planned to hold annual memorial services on Easter Sundays, to include a reading of a roll of the names of all those interred there. The first gift to the club was a crape myrtle donated by Mrs C. T. Hutchens, daughter of Mary Echols, in honor of W. H. McDaniel. The group, which continued at least through 1958 under the leadership of A. W. Hawley, compiled a history of the cemetery, including records of burials and planned to produce a map of plots.

The cemetery holds the graves of at least sixty Confederate veterans and one Union soldier. The Alexander H. Stephens Chapter of the United Daughters of the Confederacy began planning a memorial to Company C of the 20th Alabama Regiment which was raised at the campus of Howard College in Marion, Perry County. Since the college had moved to East Lake in the late 1880s, the memorial was to be located at East Lake Cemetery. By the time Hattie Williams succeeded in completing the project in 1951, the chapter had decided to also honor veterans of the Spanish-American War, World War I and World War II with a four-sided "Soldiers' Monument.