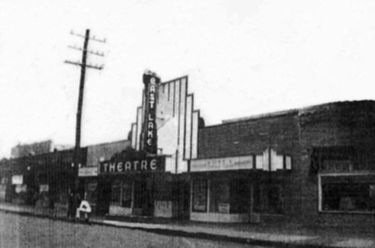 The East Lake Theatre was 700-seat single-screen movie theater located at 7611 1st Avenue North in East Lake, in a business district frequented by students of nearby Howard College.

The first East Lake Theatre was constructed in the late 1920s or early 1930s. In the 1940s the cinema was operated as as part of Frank Merritt's Community Theaters circuit. Its business dropped off when the Waters Theatre Company opened the new, larger College Theatre across the street in 1947.

Waters merged his chain with Community Theaters in 1950. Merritt retained ownership of the building, but operation of the cinema was turned over to Waters. Not long afterward, he closed the East Lake Theatre.

By the 1960s the former cinema was converted into a skating rink. In 1974 Fashion Dinettes furniture store began operating in the building and later became the home of Estate Liquidators.