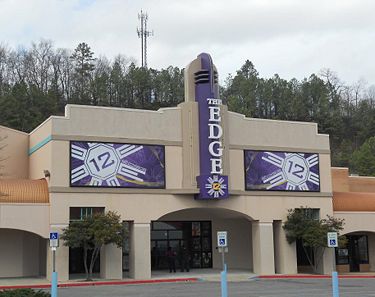 The shopping center was constructed in 1988 and opened in 1989 with Home Depot and Cobb Festival 12 cinemas as anchor tenants. During construction, which involved cutting into Red Mountain, a landslide occurred, causing damage to several buildings at the adjacent Mountain Top Apartments. Settlements for damages topped $8 million.

The center struggled to fill vacancies over the next several years and suffered from the loss of anchors Lechmere, Children's Palace and Phar-Mor shortly after opening. The property fell into the hands of Citicorp and eventually got a boost in 1993. That year saw the addition of Stein Mart, the announcement that Goody's would open there, and construction of six additional screens at the cinema multiplex.

The "Crestwood-Oporto District Redevelopment Plan", commissioned from KPS Group by the City of Birmingham and completed in January 2006, envisioned a redevelopment of the Festival Centre site for residential uses with retail/office buildings facing Crestwood Boulevard

On the evening of December 25, 2011 a large group of unsupervised youths disrupted theater operations, roamed around the theaters and shopping center in unruly packs, and looted the open candy shelves in the lobby. Operators closed the cinema and Birmingham Police dispersed the crowds. Similar gatherings reportedly have occurred near multiplexes in Trussville and Vestavia Hills.

In early 2012 the shopping center was sold by DDR to Skyline International Development Inc. and Mark Gold of Toronto, Canada for $3 million. The company announced plans for a multi-million renovation, including space for a Birmingham Police Department substation and community outreach center. Occupancy rates increased quickly, despite the closure of Anna's Linens, and the developers added a Steel City Jump Park trampoline park inside the cinema and a separate Off the Wall family fun center.

In late 2018 Gold and his partners sold Crestwood Festival Center to a subsidiary of Toronto's Timbercreek Asset Management for $11 million.