The Birmingham & Edgewood Electric Railway was a 5.4 mile streetcar line that extended streetcar service from downtown Birmingham into Shades Valley. It was built in 1909 by the Birmingham and Edgewood Electric Railway Co. (incorporated on July 15, 1909) and officially opened on July 1, 1911. In 1912 the Birmingham Railway, Light & Power Company assumed operation of the line and labelled it as the No. 39 Edgewood line. The modern day MAX Transit Route 39 bus route still retains the #39 designation through Homewood. The last streetcar ran on April 27, 1949. 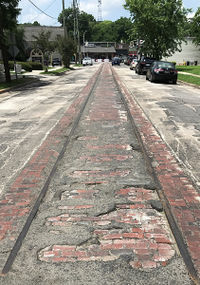 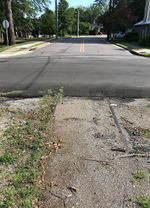 Streetcar tracks at the end of Manhattan Street 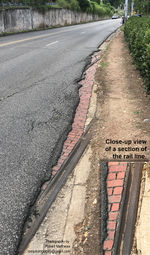 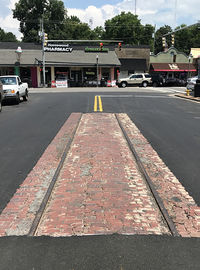 Streetcar tracks after restoration in July 2018

The line ran from the end of the South Highlands line, over Red Mountain, into Homewood, and ended in Edgewood. When the route was being planned, it was determined that the grade up Red Mountain was too steep for the streetcar, so a 72-foot deep cut was made at Lone Pine Gap below where Vulcan is today. The line passed underneath the Birmingham Mineral Railroad at the crest and continued south until it reached Central Avenue. From there it continued down Central until turning west on 28th Court South (in 1929 this was labeled as 16th Street) where it continued for two blocks. It then turned south toward Manhattan Street and continued until it reached Highland Street where it took a short jog down Winkler Avenue where it then crossed Oxmoor Road. From there it continued down Broadway Street, until it terminated at Shades Road. In 1912, the line was extended further down Broadway and Saulter Road, until it reached Old Columbiana Road. It then continued for a short distance until it reached Edgewood Lake and Edgewood Park.

The tracks along Broadway Street were uncovered during maintenance work in April 2018. Most of the road was paved over again, but a section of the road with the original streetcar tracks was left uncovered and a small section was restored in July 2018.

Another section of tracks is still visible (as of 2018) at the intersection of Manhattan Street and Parkridge Drive.

A small section of the original streetcar tracks are still visible in the southbound lane of 20th Street South as the road approaches the curve beneath Vulcan at Lone Pine Gap.